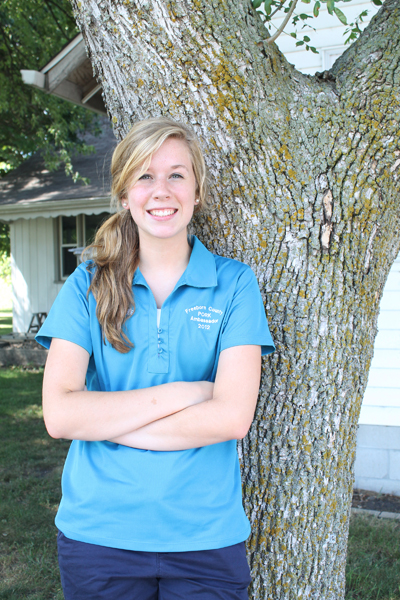 Annabelle Randall is the pork ambassador of Freeborn County. She has been working a stand at the fair, handing out ribbons for pig showings and attending different conferences in Minnesota this summer. -- Colleen Thompson/Albert Lea Tribune

Randall’s list of accomplishments goes on and on. She’s got her sights set high and took her ambitions to Oral Roberts University in Tulsa, Okla., to major in elementary education. She started Aug. 10.

But before she left, Randall had a summer full of representing Freeborn County as the pork ambassador.

“I came across this scholarship opportunity and thought I’d take it,” Randall said. “It’ll help me do things I’m not necessarily comfortable with, like public speaking, and will strengthen me in ways beyond pork knowledge.”

She found out her application was accepted in February.

“I had to write a paper, fill out an application and answer some questions during an interview process,”  Randall said.

Since then, Randall has been representing the pork industry through different retreats and functions.

On June 18-20, Randall participated in the Minnesota Agriculture Ambassador Institute. Ambassadors, representing the different agricultural industries, converged in Red Wing. The 17-year-old program focuses on educating ambassadors from 16 to 22 years old. This year more than 40 of them gathered for the conference.

“There were lots of speakers, meetings, a visit to a shoe factory and even a boat tour,” Randall said.

Randall also played a large part in the Freeborn County Fair, easily spotted with her bright blue collared shirt and big smile. She informed kids about different facts on pigs at the Kiddie Barn, distributed samples at the pork stand and handed out ribbons for open class in 4-H pig showings. See, she grew up on a hog farm.

Randall’s father, Tim Randall, has been raising pigs since 1986 and encouraged her to apply for pork ambassador.

One pork-related issue Annabelle and her father are very passionate about is setting the record straight on gestation stalls. Gestation stalls are metal enclosures, usually about six feet by two feet, that house breeding sows during their pregnancy. There is been a movement to try to get rid of them because the argument is that they’re too small to hold animals.

“If you throw a sow into a pen of pigs after she’s given birth and nursed, she has a chance of getting killed because she’s so vulnerable from nutrition drainage,” Tim said. “Gestation stalls keep them separate for safety and monitoring.”

Annabelle learned more about this issue at the multiple pork-related events she has attended. It’s a controversy she has became outspoken about.

The opposing side created a campaign without knowing all the facts, according to the Randalls.

“Farmers won’t abuse the hogs; we make sure they have the best care,” Tim said. “We know that the best producing animal, and therefore the most profitable one, is a comfortable one.”

Interesting fact: Annabelle was home-schooled until she was in sixth grade.