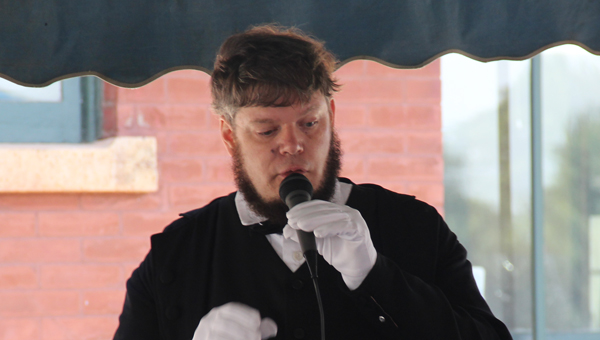 Bryce Stenzel of Mankato portrayed Abraham Lincoln in front of the Wells Depot Museum. More than 80 people listened to him talk about the 16th president of the United States. -- Colleen Thompson/Albert Lea Tribune

WELLS — “Four score and seven years ago our fathers brought forth on this continent, a new nation, conceived in liberty and dedicated to the proposition that all men are created equally.” President Abraham Lincoln gave this memorable speech 149 years ago, but Wells residents were able to hear him tell it once again.

Eighty people sat underneath a tent in front of the Wells Depot Museum on Friday to hear Bryce Stenzel, a Mankato native, portray the 16th president. In the two hours he was there, Stenzel captivated the audience’s attention by telling the detailed biography of Honest Abe.

“My main objective was to preserve the Union,” Stenzel, as Lincoln, said of the motive behind the Emancipation Proclamation speech.

Fridau marked the 150th anniversary of a very grim event. On Aug. 17, 1862, four young Dakota hunters killed five settlers at Acton on a dare. Thus started a series of attacks that came to be known as the U.S.-Dakota Conflict. 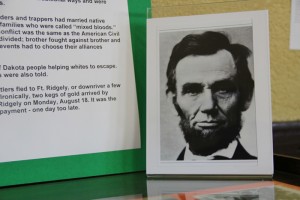 The U.S.-Dakota Conflict exhibit in the Wells Depot Museum displays a picture of Abraham Lincoln. Lincoln had the final say in the execution of 38 Dakota men in Mankato on Dec. 26, 1862.

“We saw Bryce’s information online and thought it would be appropriate to have him come on this anniversary and commemorate this historical conflict,” Betsy Hermanson, a volunteer at the Wells Depot Museum, said.

Abraham Lincoln decided who received the death sentence after hundreds of captives surrendered. Mankato became the site of the largest mass execution in history when 38 Dakota men were hanged on Dec. 26, 1862.

After Stenzel’s presentation, crowd members had the opportunity to ask him questions. Older men and women shook his hand, thanked him for coming, and shared their own historical accounts. One man even told him of how his grandfather was in Gen. William Sherman’s army.

Stenzel, a historical interpreter of 23 years, told those who approached him of his passion for history.

“It’s important to me to make connections not only in historiography but with people,” said Stenzel, who majored in history and received a teaching degree. “It’s not just an act of memorization.”

The Wells Depot Museum and the Wells Public Library were in charge of organizing the Abraham Lincoln historical interpretation. Funding was provided by Clean Water, Land and Legacy Amendment funding.

But Stenzel wasn’t the only one in the crowd with a passion for history. Hermanson and others made their own place in history when they played a role in saving Wells’ old train station two years ago.

“The depot was a wreck and was going to be destroyed, and so we bought it for a dollar,” Hermanson said.

Several fundraisers, such as pancake breakfasts, were held in order to raise enough money for restoration. The former depot is now a museum and displays the rich heritage of Wells and the history it encompasses.

The opening words to the Gettysburg Address were first spoken in 1863 and went down in history as the beginning of freedom and democracy equally applying to all citizens. Over a century later, people still acknowledge that infamous speech. Looks like the words of Honest Abe: “The world will little note, nor long remember what we say here,” aren’t so true after all.

The event was part of Kernel Days, the city’s annual town festival. Events in Wells continued Saturday and today.