Protesters speak out for respect, dignity 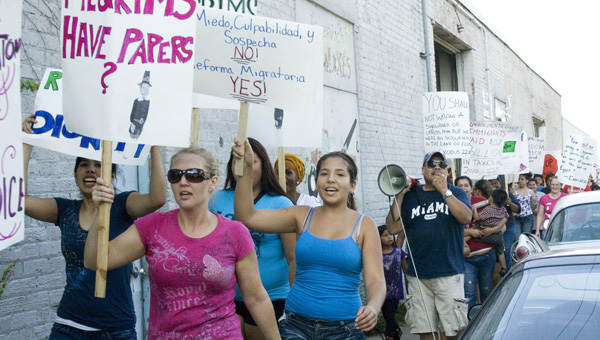 Protesters walk down Front Street carrying signs Monday night in response to a controversial message on a sign at the corner of Pearl and Front streets. -- Sarah Stultz

Almost 200 people from across the region marched the streets of Albert Lea Monday night to speak out against hate and intolerance toward the Latino community.

The protest, which began at a house near the corner of Jefferson Avenue and Front Street, moved west on Front Street to Pearl Street, where a controversial electronic sign, owned by Albert Lean Mal Prinzing, has been hanging high on the side of Dima Corp., 628 Pearl St.

Up until shortly before the protest began, the sign read: “Catch and Release – No!; Deport Illegals – Si.” Prior to the protest, the sign was changed to say, “Wise up. Check Dictionary, Illegal is Criminal.”

Protesters said the signs target the Latino population and create an unwelcoming environment for Hispanics in Albert Lea.

“There’s a climate of intolerance and hate toward the Latino people in Albert Lea, and the sign plays into this climate,” said Jeffrey Jurewicz, protest organizer with Owatonna-based Centro Campesino.

Jurewicz said Centro Campesino, a nonprofit advocate group for the Latino and migrant community in southern Minnesota, heard about the sign and decided to speak out against the message and organize the protest.

They spread the word via phone and other social media sites, and the people responded.

There were more than 100 local residents already participating when a busload of residents from Owatonna and Waseca pulled up to join in.

The protesters were young and old alike — and not all were Hispanic. They carried signs with messages of respect, dignity and even some scripture.

They marched around the block at least five times shouting, “Yes we can!” in both English and Spanish before walking up to the Iglesia Pentecostal Emmanuel on Washington Avenue for an additional meeting.

Prinzing, whose business owns adult-novelty stores and circulates adult videos, was nowhere to be found; however, at one point after 7 p.m., a yellow plane could be seen flying over downtown Albert Lea, carrying the same message that had formerly been on the electronic sign. Jurewicz said the same message was being flown in Owatonna today.

Prinzing typically doesn’t respond to requests to speak with the news media.

“We need respect for everybody,” said the Rev. Frederico Rivera of Iglesia Pentecostal Emmanuel.

Rivera said he has been in Albert Lea for five years, and two years ago he opened the doors to the church. People from many walks of life attend.

“I love the community, and I love the people,” he said. “All people, we are equal.”

Eleazar Duenez-Sanchez, of Austin, said his father, two sisters and two brothers live in Albert Lea, and he heard about the sign.

Though he did not have perfect English, Duenez-Sanchez conveyed his frustration with the sign and its effects on the community.

He has lived in the United States for 23 years and has worked for Hormel for 11.

“I’ve lived here, working for my family, paying for my bills. That’s it,” he said.

Monica Hernandez, who was born in Austin and raised in Albert Lea, said the sign has had a direct effect on her and her family.

Hernandez said she and her children used to be able to watch movies on their back porch; however, now, every time they do, they see the sign.

“Your point has been made,” she said. “Now show some respect,” she said.

“It’s effecting everyone in the community.”

Albert Lea 3rd Ward Councilor Ellen Kehr, who is also a member of the Albert Lea Human Rights Commission, came to the event mainly to observe.

“I am particularly concerned about the message we give our children,” Kehr said. “It’s about our children, keeping them safe.”

Jurewicz said Centro Campesino would be willing to organize a forum to discuss the different sides of immigration, but it has not received feedback back from Prinzing or others about participating.

Paul Westrum, founder of the Minnesota Coalition for Immigration Reduction, was also slated to be at the protest, but he instead traveled up to Centro Campesino’s headquarters in Owatonna.

He said he borrowed Prinzing’s large yellow sign with moveable letters and together with three others drove around Owatonna with a message. Then they drove the sign around Ellendale, Geneva, Clarks Grove, before coming back to Albert Lea.

He said he found out that the protest in Albert Lea was not going to be as big as they thought, so they changed their plans.

“I would have liked to have been there, but we just figured it might have added too much fuel to the fire,” Westrum said. “I think we got a real good response from people up there.”

He said he has heard that Prinzing plans to change the message on the sign weekly. Westrum’s group is planning on putting up signs of their own.

See a gallery of images here.