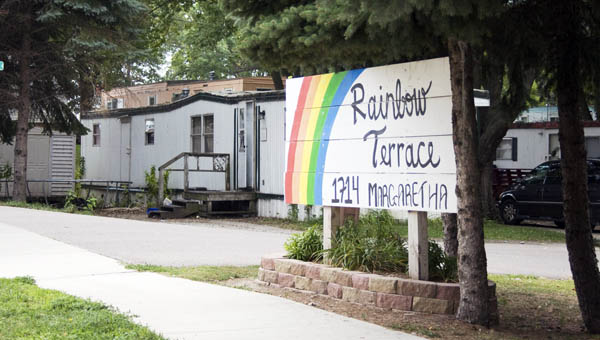 The owners and manager of the Rainbow Terrace mobile home park in Albert Lea were charged this week with discriminating against a Hispanic couple who was trying to lease a park lot.

The U.S. Department of Housing and Urban Development is alleging the owners and manager violated the Fair Housing Act in 2009 by making racial statements and slurs about the national origin of the couple trying to lease.

The federal charge lists Mary Ann Jensen as the on-site property manager and Timothy J. Johnston and Lauri Johnston Richert as the owners. The property is operated under the name of Windstone Properties.

The federal document alleges that when the wife, a Mexican-American, and her sister came to inquire about a park lot, Jensen asked about the nationality of the wife’s husband who could be seen sitting in a pickup nearby. When the wife affirmed her husband was from Mexico, Jensen allegedly stated she did “not want any more Mexicans” living at the park because they were “too much trouble,” according to the documents. The manager reportedly told the wife that her husband was “no good” and referred to him with a racial slur.

She also reportedly asked the woman if she and her husband smoked or drank and expressed that Mexicans “are drunks” and have parties on the weekends.

In an interview with a HUD investigator, Jensen reportedly admitted that she inquired whether the husband was an “illegal alien” and that she told the wife she did not want any more “illegal aliens” on the property, according to documents.

She also reportedly admitted she asked whether the couple smoked or drank and stated she advised that police had been coming more frequently because of trouble between neighbors.

The federal documents allege the discrimination continued in the next few weeks.

The charge alleges Jensen allowed the couple to move their belongings into a trailer at the property on March 14, 2009, but told them they could not live there until their application was fully accepted.

On March 23, 2009, Jensen and the owners ordered a tenant screening report of the couple that took a few days to process.

That same day, the couple signed a real estate purchase for the trailer.

On March 26, 2009, Jensen reportedly contacted the wife’s sister and told her that the couple’s application had been accepted and that they could begin to live at the property. At that time, the tenant screening report still had not returned.

On March 29 or 30, 2009, Jensen reportedly knocked on the couple’s door and angrily informed them that the results of the report had returned and that they were “not good.”

Jensen reportedly used profanity and accused the wife of lying about their past rental history.

On April 3, the wife and her sister met with Jensen to review the report, and the wife claimed someone had stolen her identity, to which Jensen accused her of lying. The wife filed a report with the Albert Lea Police Department alleging the identity theft.

The investigation also reportedly found evidence showing that other Mexican Americans living in the park had also been subjected to ethnic slurs by the manager.

The case will be heard by a United States administrative law judge unless any party elects to have the case heard in federal district court.

If an administrative law judge finds that discrimination occurred, he award damages to the couple. The judge may also impose fines to vindicate the public interest, order other relief to deter further discrimination or require payment of attorney fees.

If the matter is decided in federal court, the judge may also award punitive damages to the couple.

“Discrimination has no home in America,” said John Trasviña, HUD assistant secretary for fair housing and equal opportunity, in a news release. “Mobile home residents do not have to accept derogatory statements based on their national origin when trying to rent.”

The Tribune made phone calls to both Johnston and Richert at their Windstone Properties offices in St. Charles, but the calls were not immediately returned. No one was at the office in the park Wednesday afternoon either.