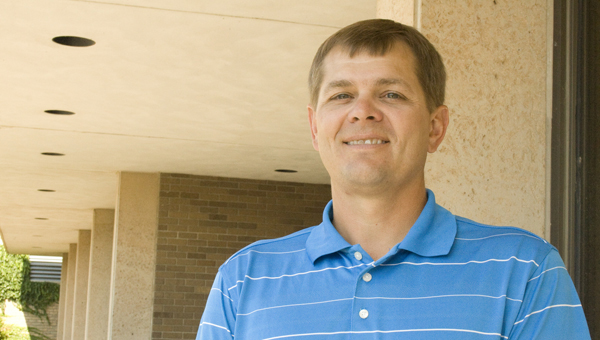 Albert Lea Mayor Vern Rasmussen is seeking a second term to the mayoral seat. He has served as mayor during the last two years and was on the Albert Lea City Council for six years prior. -- Sarah Stultz/Albert Lea Tribune

Rasmussen, 48, of 1426 Edgewater Drive, said his largest goal as mayor is to create an opportunity for people to succeed.

“It doesn’t matter if you’re a business owner, a homemaker, a laborer or a student,” he said. “That’s my goal.”

Rasmussen said he has started to put out some of his political signs and he has been meeting with some groups as he gears up for the election.

The following is some information on Rasmussen’s background, along with his viewpoints on several issues.

Before he was elected mayor in 2010, Rasmussen served on the Albert Lea City Council for six years, representing Ward 1. He is also the president of the Albert Lea Port Authority.

Outside of the city government, Rasmussen works as a physical therapist for Mayo Clinic Health System in Albert Lea.

He and his wife, Marilyn, have two children, Katie and A.J.

Rasmussen also is a basketball coach for the Albert Lea Girls’ Basketball Association and enjoys hunting and golfing.

Rasmussen said he thinks the city needs to continue to lobby and work with state leaders to make sure the state can be competitive with surrounding states.

He noted the city should also utilize the economic development tools it already has in place, including tax-increment-financing funds and grant funds, and look at other creative ways to market and establish a competitive business environment.

Rasmussen also pointed out the importance of working with Albert Lea High School and Riverland Community College to make sure the needs of local businesses are being filled.

Because a majority of growth is going to come from local businesses, he said it is important to promote existing businesses.

Rasmussen said he is in favor of renewing the half-cent sales tax, of which the money goes to support cleaning up area lakes.

“We’ve all talked about how the lakes are a jewel in our community,” he said. “In order to maintain these lakes, we’re going to need a funding source.”

He noted he understands it is a long process to clean the lakes and that it may take longer than what some people may think.

Along the same goal of opportunity, Rasmussen said he thinks the streetscape project — which includes replacing the street, sewer, water and other amenities on Broadway Avenue downtown — creates an opportunity for the community.

He said the street and underground infrastructure need to be replaced regardless of whatever else happens, and he thinks it is important to save the city’s heritage.

The project is estimated to cost $4 million.

“Whether we have to spend all the money that’s estimated at this point, we will continue to move forward,” Rasmussen said.

Rasmussen said in his conversations with members of the community, it has become apparent to him that the community values some form of full-time Albert Lea Fire Department.

“I support that kind of concept, but we need to look at ways to become more efficient, to utilize our staff more,” he said.

He noted the city also needs to look to the future and opportunities to increase funding for the department, whether through grants or through working with other entities in the county.

Rasmussen said he also looks at the issue as one related to economic development and asks whether businesses would leave the city if there were slower response times.

Though the Vitality Project may not be for everyone, Rasmussen said people can’t deny the national and worldwide recognition that the project has brought to Albert Lea.

“With anything we do in the city of Albert Lea, for me it’s all about opportunity,” he said. “We’ve created an opportunity for people to be involved in something different.”

He said he still thinks there’s still many opportunities for healthy initiatives that piggy-back off of the project, but ultimately the community has to decide whether to continue it.

“Obviously the city supports it, but I think the community has to decide if it should or shouldn’t continue to move it down the road.”

Rasmussen said while he thinks it is important for the community to weigh in on this topic, he supports a four-year term.

He also noted the expense of running for mayor every two years, pointing out that it may limit who could run for the position.