Raymond Darrell Miller, 80, formally of Oakland and now Austin, went to walk with the Lord on Aug. 10, 2012. There to greet him were his parents, Edward and Dora Evelyn Miller; two brothers: Frances and Wayne Miller; sister-in-law, Elaine Miller; and many dear friends and family. 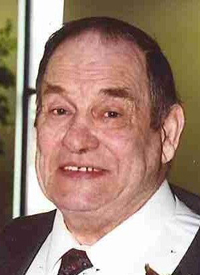 Ray was born on June 16, 1932, in Austin. He was raised on a farm in Oakland with his family. As he grew up he attended a one room school house in rural Moscow Township, and then graduated from Austin High School in 1950. Throughout high school he was a member of the Austin wrestling team. Also he was a member of the Austin FFA, livestock team and the Oakland/Moscow 4-H Club where he exhibited many animals including sheep and dairy at local, state and national fairs. He was very talented with animals, being able to earn many grand champion awards.

On April 18, 1953, Ray married Mavis Louise Peterson of Hayward at St. Augustine Catholic Church in Austin. Soon after their marriage, Ray served in the Army on the front lines, during the Korean conflict. Once he returned home, Ray and Mavis started a family on their dairy farm. They were blessed with two daughters: Kathleen (Miller) Rohrbaugh and Donna (Miller) Hogan.

Again the family was involved in FFA and 4-H where they exhibited purebred Guernsey cattle at the county, state and national levels. Ray was an active 4-H leader and mentor of the younger dairy 4-Hers.

In addition, Ray enjoyed volunteering for church projects including the Christmas tree lot at St. Edwards Catholic Church where he was a charter member. For fun Ray loved to play and watch baseball, snowmobile and teaching many people how to downhill ski.

Throughout his life, Ray was proud of his crops and loved his cows, which he called his girls.

Ray will be greatly missed by many.

Funeral services will be at 2 p.m. Wednesday at St. Edwards Catholic Church with the Rev. Steffes officiating. Visitation will be at Mayer Funeral Home from 4 to 7 p.m. today with a prayer service held at 6:30 p.m. Visitation will also be held half an hour before the service at the church. Interment will follow the funeral service at Fairview Cemetery in Oakland with military rites by American Legion Post No. 91. Per family’s request, in lieu of flowers memorials may be made to donor’s choice in memory of Ray Miller.