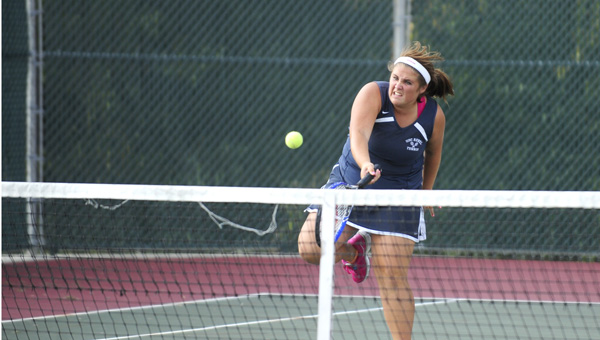 Brandi Hagen/Albert Lea Tribune USC No. 3 doubles player Anglea Bixby hits a ball back over the net Thursday at a match in Albert Lea.

Despite the score, both coaches were pleased with the girls’ performance and positive attitudes toward the game.

Jill Bailey, USC’s head coach, said her team was focused and ready to battle from the first point to the last.

The Rebels had played in two tournaments before the match in Albert Lea.

The match was Albert Lea’s first varsity match of the year and head coach Matt Levorson said even though it was a loss it was a good match.

“They played their game,” Levorson said. “USC just has had more practice and more matches already this season.”

He said the score doesn’t reflect how close the games actually were.

“We got a lot of points in each game, but we just didn’t get the match points,” Levorson said. “They were disappointed they came up short, but they knew they played a good match and put in the effort.”

To prepare for their triangular on Monday against Marshall and New Ulm, the Tigers will work on movement on the court and continue to work on placing the ball.

The Rebels (4-2) will play again Saturday in New Prague in a tournament beginning at 9 a.m.

The triangular will begin at 2 p.m. Monday in Albert Lea for the Tigers.