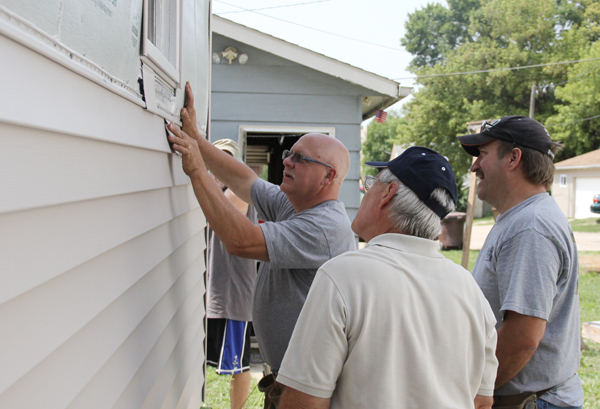 Keith Duncan works on a piece of siding as Kevin Davis and Wayne Jensen look on. Davis and Jensen, who both work at Streater, were volunteering at the house Wednesday. -- Kelli Lageson/Albert Lea Tribune

Local people are lending a helping hand to their neighbors as the Rocking the Block project comes to a close. 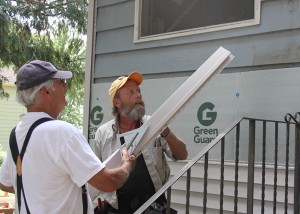 Wayne Hanson, left, a volunteer and former president of the local Habitat for Humanity, works with Todd Thompson of Thompson Roofing. The two were both volunteering Wednesday to help with siding the home at 414 Euclid Ave.

Several local groups collaborated to head the week-long project that targeted five homes in Albert Lea. There was also a small army of volunteers working day and night on the projects — inside and out of the homes.

“They’re all people who wanted to work themselves but need extra help,” organizer Jim Troe said.

Freeborn-Mower Habitat for Humanity, Shinefest’s Healing Hearts & Homes, the Albert Lea Housing & Redevelopment Authority and the United Way of Freeborn County, along with funding from local businesses, worked together on the new event. Wednesday about 10 volunteers were helping install new siding at 414 Euclid Ave. at the home of Keith and Carol Duncan.

“We had someone here Saturday to start so we could start immediately Monday,” organizer Tom Egan said. 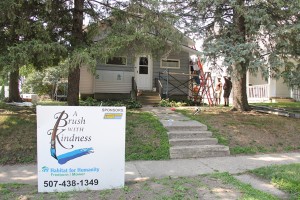 Volunteers work to put on new siding at 414 Euclid Ave. The home was one of five chosen for the collaborative Rocking the Block project taking place this week.

Egan works with Habitat’s A Brush with Kindness organization and said the whole project will be done within a week. He said volunteers of all abilities have been helping with the project. The homeowners said they are thankful for the work that’s being done.

“It’s really a blessing to us,” Carol said.

Keith said he was surprised their project was chosen, but that it was a good surprise. He applied through the HRA about three months ago. When he found out the dates he took vacation from his job at Alamco so he could help during the day, but he still has to leave for his second job as a maintenance person for Our Father’s House.

Keith said the amount of help has been overwhelming and that people have been working day and night to get the project completed.

“People have been working all hours of the day,” Keith said. “The work is coming together well.”

Rocking the Block focused on minor home repairs like painting, siding, installing windows and doors, landscaping and other projects. Some projects weren’t so minor, including a bathroom restoration in one home. The idea was to improve the look and livability in neighborhoods in Albert Lea to make them more welcoming. The project, in its first year, aims to stabilize the market value and property taxes for the community.

Many building items were donated, and other businesses also donated funds to go toward paying for items necessary to complete the upgrades to the homes.

Rocking the Block is also looking for a furnace or donation of $3,000 for the home of Kim Behrens. People can contact the Freeborn County United Way at 373-8670 for more information.