Shinefest does a home makeover 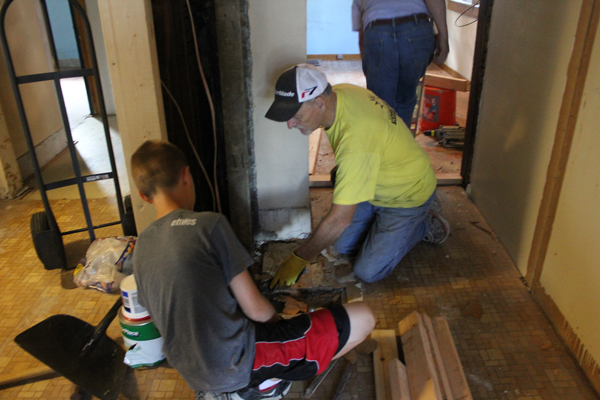 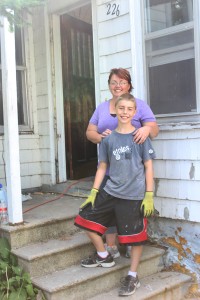 Kim Behrens and her son, Jordy, stand outside of their home on Pearl Street. Their home is a part of the Healing Hearts & Homes project and one of five homes being renovated in this year’s Rock the Block outreach through Shinefest.

Kim Behrens and her two sons, Zach, 17, and Jordy, 13, are having their home renovated — at no cost to them.

The Behrens family is one of five families to be a part of the Rock the Block program, through volunteer-oriented Shinefest. Rock the Block focuses on a deserving neighborhood in Albert Lea each year. This year Pearl Street and the surrounding blocks was the location.

And as of last Monday, the Behrens’ 100-year house is having the interior completely redone.

“This is the most extensive of our projects,” said Healing Hearts and Homes representative Ryan Applegate.

The house has been a part of the Behrens family since 1971 when Behrens’ grandparents bought the house.

“I’ve had memories in this house since I was a baby,” said Behrens, who has been working at the Albert Lea Seed House for two years.

Behrens first moved in in 1999 when she was pregnant with her youngest son, Jordy. They lived there for seven years but moved elsewhere when a new job presented itself. They ended up moving back four years ago and have called it home ever since.

To receive this home makeover, Behrens simply had to fill out an application and tell why she was deserving of a home renovation.

“The bathroom is the main reason we chose this house,” Applegate said. “Mold developed from leakages, and it was a huge health hazard.”

Along with thin, breakable quarter-inch sheetrock and a hornets’ nest in one of the upstairs rooms, there were a couple of rooms that had windows but no panes. 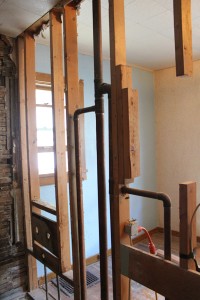 A former wall of the main floor’s bathroom. One of the organizers, Ryan Applegate, said the deteriorating condition of the bathroom was one of the main reasons they were at the home.

“It would be freezing in the winter,” Behrens said.

The renovation consists of installing new flooring, redoing the walls and adding new paneling. A design team will take care of countertops, cupboards and wallpaper styles and colors.

Behrens and her two sons have been crashing at a hotel while the work is being done but have been helping out at the house every day because of an equity agreement. Preparation work was being done all last week, but starting today there will be about 300 volunteers dedicating their time to getting the house in tip-top condition by Saturday.

“I’m a single parent, and fixing this up by myself would have been way more than I can afford,” Behrens said. “I’m just so grateful.”

Although some people would want to make sure each little detail is done a specific way, that’s not the case for Behrens. When it comes to the decision making, she doesn’t ask for much. She lets the workers and volunteers do their thing.

“This is being done for me so I’m not one to demand anything.” Behrens said. “I’m so beyond thankful.”

Today through Friday: Service projects at five local homes for the Rock the Block project.

• 9 a.m. to noon: Free oil changes in the 4-H Building at the fairgrounds. Make an appointment by calling 377-1412 and bring your own oil filter.

• 9 a.m. to noon: A kids clothing shop will be at Floral Hall at the fairgrounds.

• 4 to 11 p.m.: Neighborhood block party at the park at the corner of Court Street and Euclid Avenue. The party includes a walk, games, food and a movie.