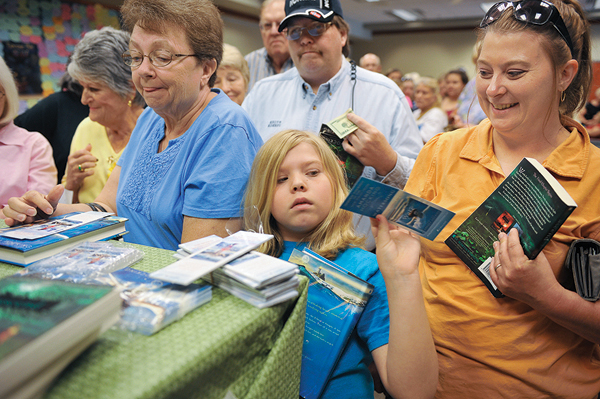 Katelyn Billat, 10, waits in line to get her copy of “Wake” signed by its author, Amanda Hocking, Tuesday afternoon at that Austin Public Library. -- Eric Johnson/Albert Lea Tribune

AUSTIN — Austin got a rare glimpse Tuesday into the mind of its e-book queen. 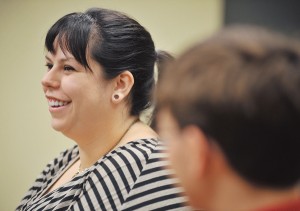 Author Amanda Hocking talks about her career and latest release, “Wake,” during a kickoff to her new book tour at the Austin Public Library.

Amanda Hocking kicked off a nationwide tour for her newest book by speaking to a packed room at the Austin Public Library.

Austin Daily Herald reporter Trey Mewes interviewed the Austin paranormal romance author live Tuesday about her writing process, her books and the act of self-publishing, with a question-and-answer period following the talk. About 100 people attended, filling both sitting and standing room and ranging in age from young readers looking to meet the author to older adults interested in Hocking’s success story.

“Wake” is the first installment in her Watersong Novels, a series of four books that garnered a $2 million book deal from St. Martin’s Press. The series revolves around sirens, creatures from Greek mythology that would lure sailors to their deaths.

Hocking had been writing from an early age. When she was young, her subjects spanned from dinosaurs to fantasy to “Star Wars” science fiction. It was always something she had intended to do. 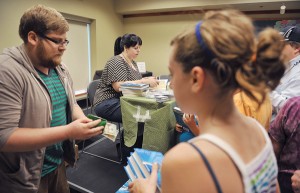 She finished her first novel around the time she was graduating high school, and planned to get a job and write until she got published. Over the years she sent numerous letters to agents, but all of them denied her.

After eight years of trying the traditional route, she decided to shoot for self-publishing instead. That was the beginning of her books’ popularity explosion.

Her writing process involves eight to 12 hours a day of writing, during which she listens to music and cuts herself off from the Internet to avoid distractions. Hocking said for a while she tried to push her writing toward darker themes and more mature subjects, but it just didn’t resonate with her.

Along the same lines, she’s also careful not to let her books become too sobering, she said. She wants them to be easy to read and lighthearted at times, even while the darker elements are present.

Her work has touched on a range of mythical and paranormal phenomena, including trolls, vampires and zombies.

“Zombies were the hardest to write about, I think,” said Hocking, noting that it was challenging to come up with so many different ways to kill a zombie. 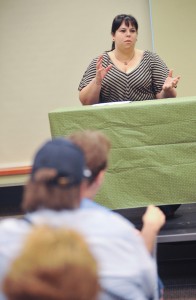 Author Amanda Hocking answers a question during the question and answer portion of her book tour kick-off Tuesday for her newest release, “Wake,” at the Austin Public Library.

Hocking cautioned other aspiring authors that self-publishing isn’t as easy as it looks, and that it pays to do some research before diving in. Actually uploading a book to a site like Amazon.com isn’t a difficult task, but getting a story finished and online isn’t all it takes.

“That doesn’t mean that it’s going to sell or do well,” she said.

She advised authors to get as many fresh sets of eyes to see a draft of the book as possible, and to use the feedback they give. When it come time to pick an agent, she recommended a lot of research, since a bad agent can be worse than no agent at all, she said.

Hocking said she isn’t sure how the first few copies of her book were sold, but the low starting price could be responsible. Each copy was 99 cents when it originally debuted on Amazon. The low price made it less of a risk for readers to give her work a try.

When sales began to really pick up on her books, Hocking said, she thought it was a glitch on the website. Copies were going off the digital shelves at a rate of a hundred a day. Soon, Hocking found it tempting to constantly be checking to see how many copies were sold.

“You don’t realize how crazy it makes you to get realtime sales,” she said.

Being the author and the publisher at the same time began to be too much for Hocking. She was so busy it was getting hard to get any real writing done.

“I knew I had to partner with a publisher for my own sanity and to keep writing,” she said. 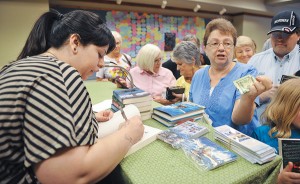 Author Amanda Hocking signs copies of her newest release, “Wake,” at the Austin Public Library Tuesday afternoon. Hocking was kicking off a book tour in support of “Wake.”

She cited some of her biggest influences as Judy Blume and Stephen King. She also admires “Harry Potter” author J.K. Rowling for being “a little nutty” and embracing that.

In response to an audience question, Hocking said she didn’t care for the bustle of the big city and she plans to stick around Austin.

After the talk, she and her assistant, Eric Goldman, who’s also been her best friend since age 16, left Tuesday afternoon on an 11-city book tour that includes a stop in New York and a Harry Potter-based convention in Chicago.

“It was fabulous,” Library Director Ann Hokanson said of the talk. “It’s not often we’re the first stop on a national tour.”