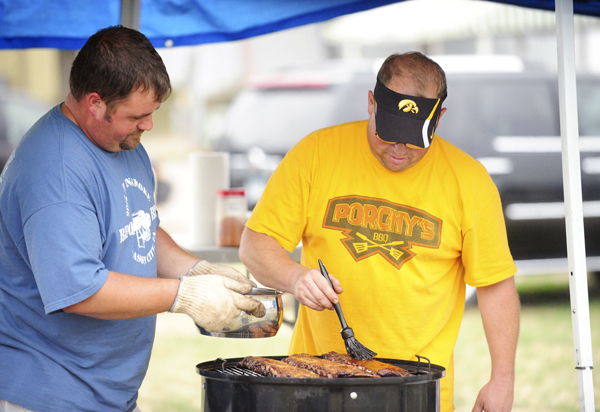 The smell of sweet, tangy barbecue flooded the Freeborn County Fairgrounds Friday and Saturday as more than 50 teams entered smoked barbecued chicken, brisket, pulled pork sandwiches and chili in the fifth annual Big Island BBQ state championship. According to Perry Vining, the man in charge of bringing the competition to Albert Lea five years ago, more than 100 gallons of chili were cooked for judges and the crowd. 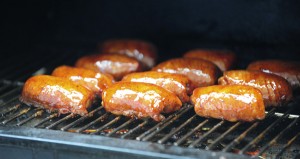 Vining said every year the food gets better than the year before because the chefs keep on perfecting their products.

One category though, is still working on its recipe.

Vining calls them the Newbie-Qs, and there are more than a dozen of them.

The Newbie-Qs, as Vining refers to them, are entrants who are new to the event in Albert Lea.

Vining said the stakes for the highest scoring Newbie-Q is a free entry into next year’s competition.

For other seasoned competitors, the weekend was a chance to put their food up against some of the same people they see at other barbecue events and see what the judges had to say.

Husband and wife duo, Carl and Monica Luckett from Rockford, competed under the name of Sweet Luck Barbecue. They started barbecuing in their home, and after seeing information online about the sport of grilling, they took their love for cooking one step further and started to compete.

The Lucketts said the secret to winning is pleasing the judges, not necessarily the audience because even though the Lucketts and members of the crowd may appreciate a rib that falls off the bone, Carl said a judge would see it as overdone.

Another entry, Tippy Canoe BBQ Crew from St. Ansgar, Iowa, set up camp at the east end of the Fairgrounds.

Joe Beland, the team leader, said barbecuing became an addiction and even though it may not always pay out, he can’t stop competing.

The Tippy Canoe BBQ Crew is ranked second in overall standings in the Kansas City Barbeque Society and was named reserve champion in 2011 during the Big Island BBQ state championship, 2011 American Royal Invitational champion and winner of the 2011 Sam’s Club National BBQ Tour.

Beland said the team started the barbecuing season in July and will continue every weekend through November.

The key to the Tippy Canoe BBQ Crew’s success has been consistency.

Beland said the team makes the same thing for every competition that way they can keep perfecting it.

On the lot behind Beland’s team, the crowd interacted with a couple of pirates who’s entire alphabet consisted of “R.”

Pork ‘N’ Pirates, a stand ran by two teachers from St. Paul, Carl Arndt and Tim Prescott, offered pirate jokes with its chili and pork for anyone who cared to listen.

The team said they normally compete in three to four events in Minnesota, but were only able to do one this year so they picked the one put on by Vining.

As school teachers, they said they appreciate that Vining uses the event as a fundraiser for the Big Island Rendezvous because it teaches people about the pioneer days. They wanted to come back to support him.

The competition started Friday with chili and chicken tasting and music.

It started again at 10 a.m. Saturday with an awards ceremony at 5 p.m.

Vining said chefs from eight different states showed up at the event to compete for a piece of the $12,000 worth of prizes.