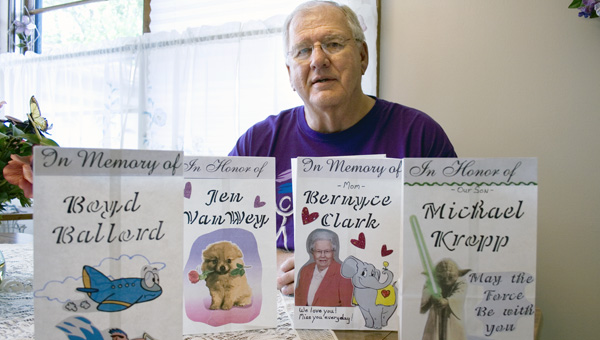 Don Kropp sits at his kitchen table with four examples of bags made up to become luminarias at the Freeborn County Relay for Life. Kropp, a cancer survivor, is a member of the Relay committee. -- Sarah Stultz/Albert Lea Tribune

Freeborn County Relay for Life gets moving at fairgrounds

Fourteen years ago, while seeing his doctor for a routine physical, Albert Lean Don Kropp was diagnosed with skin cancer.

The doctor found a growth on Kropp’s ear that Kropp said he didn’t even know existed.

Though he was OK after the growth was removed, he estimates he has had at least a dozen biopsies and removals in the years that have followed.

“The last one I had biopsied was last year,” Kropp said.

Seeing the impact cancer has had on his life and the lives of many of his family and friends, Kropp began volunteering for the Freeborn County Relay for Life 10 years ago. He’s been on the relay committee for nine years.

“We know the value of the money going for research because of our family history, so we really want to work hard for that,” he said.

This year’s relay, the signature event of the American Cancer Society, kicks off tonight at 6 p.m. with the opening ceremonies at the Freeborn County Fairgrounds. It continues through the night to 6 a.m. Saturday.

It is the 10th anniversary of Relay for Life in Freeborn County.

Local Relay Chairwoman Vicki Manges said because it is the 10th anniversary, there are several new things planned for the night.

Bingo will begin at 5 p.m., the survivor walk will follow the opening ceremonies and a silent auction will run from 5 to 8 p.m.

The luminaria lighting ceremony will be at about 9 p.m. with a bagpiper playing. The two honored survivors will share their stories throughout the night.

Manges said there are about 50 teams participating, with roughly 500 survivors.

As if having cancer himself wasn’t difficult enough, Kropp has seen cancer creep into the lives of many of his close family members and friends.

He said his own mother battled skin cancer, his father had leukemia, his younger sister had uterine cancer and his older brother had skin cancer.

His mother-in-law had an extensive battle with bladder cancer, and most recently one of his own sons Mike is battling a brain tumor.

Kropp said Mike had no symptoms of cancer, until one day he had a headache that had last for several weeks. He went to a nurse practitioner in Wabasha near where he lives, and the doctor found a tumor about three inches in size.

He has been responding well to oral chemotherapy treatments.

Doctors removed most of the tumor — what they could so it wouldn’t affect his quality of life.

“It takes a lot of lives in the end if you don’t treat it and you don’t catch it,” he said. “It’s important to have those checkups.”