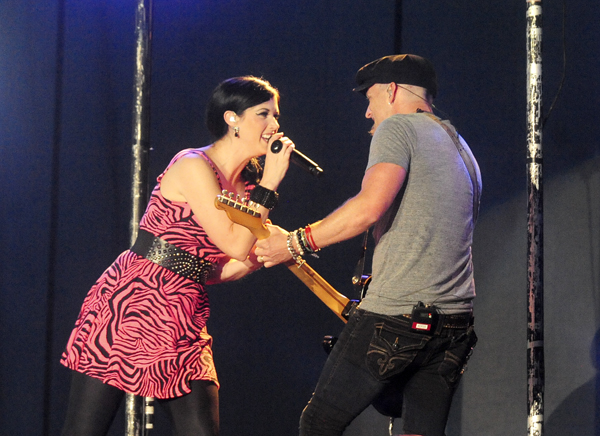 Thompson Square sings together at the Grandstand on Thursday night for the Freeborn County Fair. -- Brandi Hagen/Albert Lea Tribune

Making their entrance to “Love and Marriage” by Frank Sinatra, the country singers who comprise Thompson Square, Shawna and Keifer Thompson, made their way to the front of the stage Thursday at the Freeborn County Fair for an hour and a half performance of their latest hits. 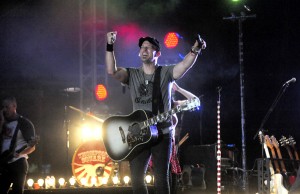 Keifer Thompson of Thompson Square grips his fingers together with excitement as the crowd sings along to “One of Those Days” at the Grandstand on Thursday night.

After performing their debut single “Let’s Fight” and one of their new songs, “Here’s to Being Here,” Keifer told the crowd that just because they have a seat, didn’t mean they needed to use it.

The married duo from Nashville, Tenn., signed with Stoney Creek Records in 2010 after working in the music world as solo artists.

As they continued their show, they sang “Getaway Car” before dedicating a cover of Tom Petty & the Heartbreakers’ “I Won’t Back Down” to the troops overseas and to the military men and women in the crowd.

Before playing “I’ve Got You,” a song that won Duo Video of the Year at the 2012 CMT Music Awards, Thompson Square thanked the Grandstand for being country music fans and allowing them to live their dreams. 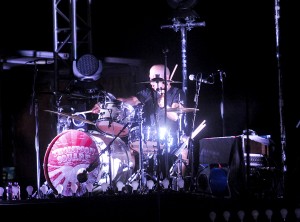 The drummer for Thompson Square plays a solo at the end of “One of Those Days” on Thursday at the fair.

Following “I’ve Got You” the couple sang “I Don’t Want to Miss You.”

The Thompsons told how they got their start in 2010 and are working on a second album.

One of their new songs, “You Don’t Get Lucky That Many Times” was a crowd pleaser. Shawna told the crowd, “Ya’ll are sweet for that” after an uproar of cheering.

Keifer picked on Kip Moore, the country musician who performed at the fair on Wednesday, as the introduction of their next song by singing the beginning of “Something ’Bout a Truck.” Shawna told him he better find a red baseball cap. Kiefer quit picking on Moore long enough to sing “Caught All the Way,” a song he and Moore wrote together.

Shawna introduced the next song by telling the women in the crowd, “It’s about all the mean Minnesota boys who have done us wrong.”

“Hate Myself For Loving You,” a song by Joan Jett, had girls on their feet clapping and singing along.

After the song Shawna said it was official, everyone was warmed up and ready for the rest of the evening.

The Thompsons then told about their path through 13 years of marriage.

Keifer joked, “One thing you don’t realize is, on top of being married, we’re brother and sister. We’re from the South, it happens.”

Taking back what he said, Keifer added, “Please don’t tweet that, I was just kidding!”

The couple connected with the crowd as they talked about the little things that makes the other crazy.

Shawna said Keifer leaves all the kitchen cabinets open, and not just one, every single one in the kitchen.

In response, Keifer said, “I might leave them open, Shawna, this is true, but at least I know where the kitchen is.”

Shawna shot back, “I do know where the doghouse is.”

The picking led into their song, “As Bad As It Gets.” The couple called it a day in the life of Thompson Square.

After singing the song, Keifer got off the stage to hug a fan named Amy who had been “rockin’ out with us all night.”

The atmosphere tamed as Thompson Square told about how they played at Legends Corner in Nashville for eight years singing traditional country songs.

“It’s time to break it down,” Shawna said. “And I don’t mean like MC Hammer.”

They couple sang “Golden Ring” by Tammy Wynett and George Jones and “Jackson” by Johnny and June Cash.

Shawna said Johnny and June Cash were an inspiration to her, and after seeing their photo while playing at the Grand Ole Opry she became pretty emotional.

They dedicated their next song, “Glass,” to the Child Fund International, which has been traveling on the road with them. Shawna said the couple sponsors a child in Indonesia and said anyone else who signs up to sponsor a child after the show would receive a signed CD.

Following “Glass,” the couple sang “One of Those Days” because there had to be at least one person in the crowd who had had a bad day.

Shawna said the upside to bad days was “wonderful nights like tonight.”

The Thompsons thanked the crowd and exited the stage, but the crowd wouldn’t let the show end there and the entire grandstand was on their feet yelling for one more song. The duo came out singing Bob Seger’s “Drift Away.”

Keifer then brought out a crew member nicknamed “Redwine” to have the audience sing “Happy Birthday” before telling the crowd he had one more question.

“Are you going to kiss me or not?” Keifer said.

With an uproar of cheering, Thompson Square sang what the crowd wanted to hear, the 2011 American Country award winner “Are You Going to Kiss Me or Not” and made their way up and down the stage shaking hands with fans.