Trust levels have changed over the years

A friendly acquaintance of mine in his late 70s recently told me that in his day, “Everyone just felt good about things,” The past was a time when things were cleaner, cheaper, safer — even the act of hitchhiking was a positive recurrence. 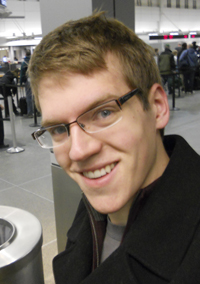 Part of me agreed with him. Nowadays nobody can be trusted, hitchhiking seems absurdly dangerous and people in general lack the emotional connections that they did in the past.

Then I thought about it differently.

First of all, it is an overstatement that’s only mostly true for white, middle-upper class Americans. For a German Jew in the 1940s, or an African-American in the 1900s on, life was hellish, to say the least. And even if tragedies like the Holocaust or Jim Crow never happened, the people of our dad’s and grandma’s younger generation were lacking in one area: the complete accessibility to develop relationships with people from all over the world.

Of course, there were a handful who had the opportunity to travel in the past, and there are many people today who don’t step out of their comfort zones to meet others with different cultural backgrounds. But to most, it’s intriguing to discover the wonderful similarities and differences between you and another person who grew up in a different culture, and/or speaks a different language.

Few would disagree in saying that if there is a purpose for humans, it is to reach out and build positive connections with one another. And when one travels abroad, or meets someone from another culture with an openness to learn, they become swept away in a whole other realm of appreciation. This not only allows the person with which they are interacting to start bridging a gap, but it lets the two meet halfway.

The only way for this equal exchange of cultural identities to happen is for the two people to be as humble and open as they can be. As Americans, we tend to resemble or portray the annoying tourist who feels the need to show “everyone else” how right she or he are, while they are sometimes lost and ranting in a language that, through the ears of others, sounds like “Fouyrretaw wallihsh meTIERR!”

An example of humility would then be listening instead of talking, realizing when we are lost and taking directions from our non-American-native friend. And sometimes it’s asking them a question in their native tongue, even if what comes out of your mouth is something like “What your food is favorite?”

I was blessed to have traveled abroad in college. Throughout my experience, I’ve become fascinated by foreign languages and cultures. The coolest thing speaking a foreign language does, as I’ve already mentioned, is help one get to know other people, through a completely different approach and understanding. I’m still able to keep in contact with my international friends through online video chat programs like Skype, and I’m able to venture out and meet new ones through an organization called CouchSurfing.

In a few weeks I’ll be living in Spain, and will stay there until June 2013. I’ll be teaching English in an elementary school there. Overall, I’m thrilled to teach them the good and bad sides of the American culture (through what I’ve seen), and learn the same from theirs. Getting settled in to a foreign country would normally be a bit difficult. But, with this CouchSurfing website, my worries are set aside.

The fact that CouchSurfing exists proves that the pureness of vintage hitchhiking lives on. You make a profile like Facebook, but you can host visitors who may be traveling through your area. You can also search for people to stay with when and where you travel.

You can see if this person is verified, vouched by other people, with feedback like: “Dan was awesome! He showed me a delicious seafood restaurant right by the coast, introduced me to some of his friends, and plays a mean game of chess.”

It’s also completely free, and if CouchSurfing finds out that you charged someone to stay with you, your profile will probably be terminated.

I’ve messaged several people in Merida, Spain, where I’ll be living, and several have offered me a place to stay for the first couple nights, along with helpful pointers. One particular person, Carlos, had a positive review on how he picked his guest up from the airport and gave him a tour of the town. He told me not to worry about finding a place to stay — he has an extra room or will help me find something. I started to thank him over and over, until he told me:

“I realize what it’s like to visit a foreign country and not know anyone,” he said. “When I visited Germany, the people there were so hospitable to me. I want to show others the kindness that was shown to me. So don’t thank me, I enjoy it.”

I’m excited to see what Carlos and I can learn from one another, along with the rest of the people I’ll meet along the way. It’s also encouraging to know that systems like CouchSurfing exist, and that some strangers still can be trusted. On my upcoming adventure, I won’t know what lies ahead. Everything will be foreign to me. If I am humble and welcoming, I believe I’ll build strong bonds. After all, to the foreigner, I am but another foreigner.

Albert Lea native Ross Pirsig has a bachelor’s degree in Spanish from the University of Wisconsin-La Crosse and has worked as a success coach at Lakeview Elementary School and as a community interpreter.