USC will get new school 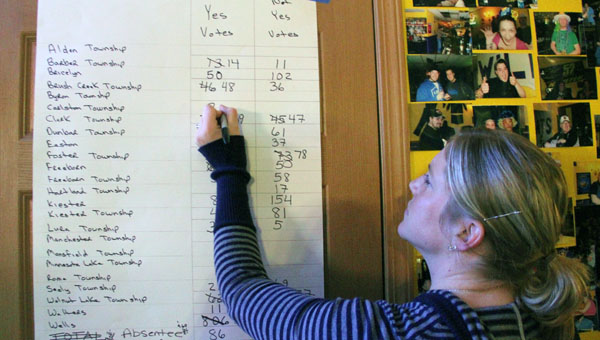 Alisa Eytcheson writes in township votes during a rally at Wildcats Bar & Grill. A new school building was approved with almost 60 percent of the votes in Tuesday's primary. -- Kelli Lageson/Albert Lea Tribune

WELLS — Voters approved a bond sale of almost $29 million so that United South Central School District can build a new school and likely be up and running for the 2013-14 school year.

After a tense night of waiting, a large crowd supporting the new school cheered and congratulated each other during a gathering at Wildcats Bar & Grill in Wells.

The exact figure on the ballot was for $28.825 million to build a new facility in Wells to house the district as the current building is facing drastic structural problems. The district’s Superintendent Jerry Jensen said he was glad the community chose to support the vote and that he hopes to respect those who didn’t want to build a new school.

“There are a lot of people to thank,” Jensen said. “It’s a huge sacrifice.”

He said he hopes the new facility will help improve achievement for the students, and that he doesn’t want to let the community down.

“It’s a lot of responsibility making sure the new facility is everything we said it would be,” Jensen said. 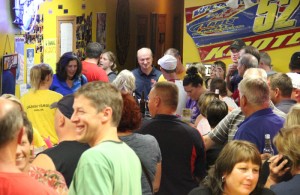 Wells residents in favor of a new school gathered Tuesday at Wildcats Bar & Grill to see how the vote turned out. -- Kelli Lageson/Albert Lea Tribune

The next step will be canvassing the votes at a school board meeting Tuesday. Jensen said even before that he will be talking with the architects working on the building, SGN/Wendel, about the next steps with construction bids. Then he’ll be making sure the land sale goes through for the 63 acres in Wells that the district is purchasing from two families. The land is south of Wells on the western side of Highway 22. Jensen said he’s looking forward to all the upcoming work to see the end result.

“This feels fantastic,” Jensen said. “It’s going to be a tremendous boost to the entire district.”

Jensen said he thinks students, parents and all communities in the district, including Wells, Easton, Bricelyn, Kiester, Freeborn and Walters, will benefit from the new building.

A community group called USC — Believe in the Future organized a gathering late Tuesday at Wildcats Bar & Grill in Wells so people could get together and wait for the voting results to come in. One member of the group, Dan Hart, said the group is thankful for the community’s support of the vote. 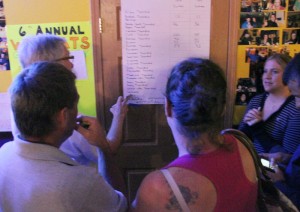 Residents examine a graph that tallied votes as they came in Tuesday evening during a gathering at Wildcats Bar & Grill in Wells.

“We are very excited about what the future is going to bring,” Hart said.

Earlier in the night Hart spoke to the crowd to thank them for campaigning, putting out signs and for all the help. He also thanked everyone for trying to stay positive while supporting the vote. Group member Ila Teskey agreed and said she was glad residents kept the campaign professional. She said the group wanted a new school, not just a remodel, and got teary-eyed when she said the group thinks the new school will be a positive thing for the entire district.

“We are just so happy and so proud,” Teskey said.

A local business had also previously pledged $100,000 to spend toward technology expenses in the district if the vote were to pass. Bevcomm, which services south and southwestern Minnesota, made the pledge in July to show support of the referendum.

Victory was not a landslide

Though the vote passed, it was not a landslide victory. About 400 voters made up the difference, with almost 43 percent of the district voting against the new school building. Community meetings throughout the past year had residents with many questions and some saying that they preferred a remodeling plan over building a new facility.

A group of concerned community members even formed their own group — the Taxpayers for Dollar$$ and Sense. The group argued that students aren’t educated by a building and that the emphasis on a child’s education should “continue to be on what is being learned, not where it is learned.”

The group also argued that since enrollment has dropped from about 800 students to about 600 students in the last five years that those numbers don’t justify building a new school.

See Thursday for a breakdown of the election by precinct.

Why the referendum came about

The board has been meeting with the public and asking residents whether they’d prefer upgrades to the current building or a brand new building within the last year. It was decided last fall that the cost of a new building, around $29 million, was close enough to the cost of remodeling the old building that the board would have a bond-issue referendum.

The issue of building a new school comes about as the current building is falling apart, according to Jensen and the board. It is one of the oldest school buildings in the state, and the board told the community last fall that it’s come to a point where there either must be renovations on the current building or a new structure built. Approximately 650 students attend the school, and the new school building would have a capacity for 750 students.

The current school building in Wells is made up of three buildings with ages of 1932, 1933 and 1961. Jensen and the board praised maintenance staff for doing as much as they could with the small amount of funding the district gets each year to patch up problems, but there were issues they couldn’t solve. Air quality in the building does not meet standards, and plumbing issues are becoming more and more common. There were also less-pertinent issues like parking and size of classrooms, among others, that the board said it would like to see changed in a new building.