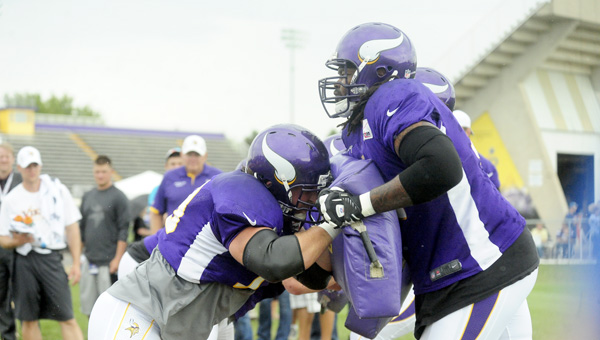 By Rebekah Dyvig and Brandi Hagen

The chanting continued until Adrian Peterson had walked yards away on the football field and blended in with the rest of the team.

Peterson had reconstructive surgery in the off season after an injury to his left knee, and fans were left wondering if he would be cleared for playing before the season began. 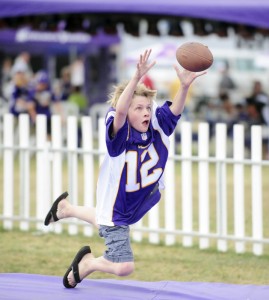 Nick Terranova-Moore jumps for a touchdown scoring catch at an obstacle course set up at Vikings training camp.

Tuesday’s practice was the first time he had worn his complete Vikings uniform and pads since his injury happened last December.

Vikings head coach Leslie Frazier said Peterson has a goal to be on the starting lineup on Sept. 9, but Frazier said it all depends on Peterson’s progress.

“It’s hard to put a time frame on it, “Frazier said. “There are so many unknowns. It’s uncharted territory for him and for us as well. We just want to monitor.”

Peterson returned to the field just in time for the training camp’s fan appreciation day.

Despite a light rain followed by sprinkling, fans packed the two sets of bleachers and lined the fence of the field to watch the Vikings practice. Some even staked out the entrance to the football field to try and catch an extra autograph.

Fans that made it to the morning session of the training camp were able to get autographs and photos with players.

The training camp attracted fans not only from the local area, but from all over.

Sandi Terranova of Osceola, Wis., drove to the training camp with her three sons, sister and her sister’s children before she and her family move to Pensacola, Fla., in a couple weeks.

“It was on our bucket list to come here before we moved,” Terranova said.

Even amid the Packer fans in Wisconson, Terranova said her family has always been Vikings fans.

“We are like the only Vikings fan in the area,” Terranova said.

Terranova said her father used to work in the Albert Lea area and has friends that lived in the area.

Besides the field entertainment, the training camp had many festivities going on including the autograph session, a bouncy house, a Plinko style game and a football obstacle course set up for children. There was also a beer garden and a Mankato Hy-Vee food court.

The training camps closes tonight at 6 p.m. as the team prepares for their Friday game against the Buffalo Bills. The game will be the Vikings second game of the preseason.