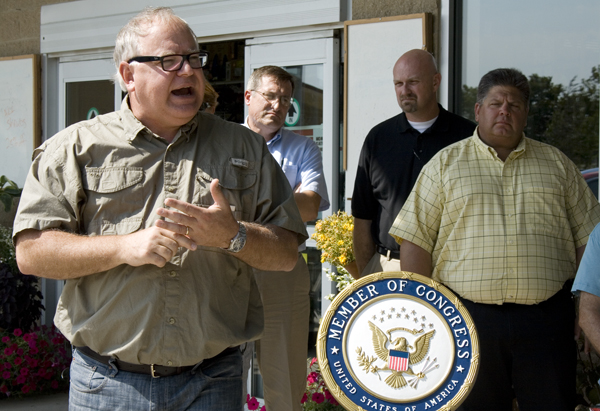 First District Congressman Tim Walz on Thursday called on the leaders of the House of Representatives to move forward with a vote on the proposed five-year farm bill.

Walz, D-Mankato, said the approval of a farm bill provides stability not only to farmers who are making plans for next year’s crop, but also to businesses in the transportation industry and consumers.

“It’s time for House leadership to stop the political games, stop the brinkmanship and do the right thing,” he said. “Give us a clean up or down vote on the bipartisan five-year farm bill now. Southern Minnesotans can’t wait.”

He said he and others worked to pass the bill through the House Agriculture Committee with a bipartisan vote of 35-11 in July. He attacked the Republican leadership for not allowing the bill to be voted on in the full House.

Walz shared his message Thursday at a news conference at Albert Lea Seed House with leaders from the Minnesota Farm Bureau, the Albert Lea-Freeborn County Chamber of Commerce, the Minnesota Farmers Union and Freeborn-Mower Cooperative Services. At least two dozen people were present.

Chamber Director Randy Kehr spoke of the role agriculture plays in the economy of Freeborn County.

Mac Ehrhardt, co-owner of Albert Lea Seed House, agreed. He said the main role of his business is to sell seed to farmers, who ultimately plant it.

“It’s difficult for them to plan for the future,” Ehrhardt said.

Kevin Paap, president of the Minnesota Farm Bureau, said there needs to be some certainty for farmers.

“We need to get this done,” Paap said.

The current farm bill expires at the end of September. There are only eight scheduled days remaining for the Legislature to approve a new bill, said Walz communications director Tony Ufkin in an interview earlier this week.

A news release from Walz’s office states the proposed farm bill makes the U.S. Department of Agriculture more efficient by streamlining many programs and cutting down on unnecessary paperwork and regulations for farmers. It eases access to lines of credit so that farmers who want to expand are able to do so.

In addition, it ensures farmers have the flexibility to grow a variety of crops without penalty or fear of losing their insurance and aims to keep shipping costs low for food and electricity producers, among other provisions.

Walz faces off against Allen Quist, R-St. Peter, in the November general election.