The bride is the daughter of Mary L. Hubbard of rural Albert Lea and Edward Hubbard of Albert Lea. Grandparents are Robert and Mary Price of Edina. 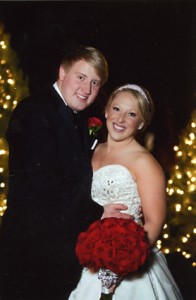 The groom is the son of Keith and Julie Eyler of Albert Lea. Grandparents are Shirley Hooker of St. Paul and Ray and Marlys Eyler of St. Paul.

Matron of honor was Jennifer Dill, cousin of the bride, of Portland, Ore. Bridesmaids were Stephanie Berg of Otley, Iowa, Alyssa Carignan of Walhalla, N.D., Amanda Citrowske of St. Paul, Sarah Gilbert of Iowa Falls, Iowa, and Jessica Marsh of Newberg, N.D., all friends of the bride.

Personal attendants were Katy Casler and Sarah Johnsrud, friends of the bride.

Ushers were Matt Durbin of Fargo, N.D., and Ralf Mehnert-Meland of Moorhead, both friends of the couple.

The original music for the wedding ceremony was written and performed by David Kolar, friend of the couple.

After the ceremony a reception was held at Interlachen Country Club in Edina. Music was provided by friends of the couple.

Carrie is a 2005 graduate of Albert Lea High School and a 2008 graduate of Minnesota State University, Moorhead, with a Bachelor of Arts degree in communication studies.

Brian is a 2005 graduate of Albert Lea High School. He received his Bachelor of Arts degree in mathematics in 2009 and a music industry degree in 2011.

The couple resides and works in the Fargo, S.D., and Moorhead area.