Stacey Sonnek of Freeborn and Eric Neubauer of Wells were married at 2:30 p.m. June 16 at St. Casimir Catholic Church in Wells. The Rev. Thomas Niehaus performed the double-ring ceremony. 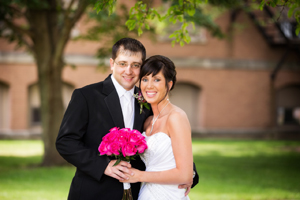 Ushers were Tim Brenega, of Albert Lea, and Matt Hotzler, of Blue Earth, both friends of the groom.

Ring bearer was Kolter Johnson, of Albert Lea, son of Nick and Heather Johnson, nephew of the bride.

Personal attendant was Janelle Oothoudt, of Albert Lea, friend of the bride.

Host and hostesses were Bob, Linda, Jesse and Cody Korman, of Alden, friends of the bride, and Rick and Linda Theede, of Wells, aunt and uncle of the groom.

Immediately following the ceremony a reception was at the Verizon Wireless Center in Mankato.

The bride is a 2006 graduate of United South Central High School and a 2009 graduate of Riverland Community College in Austin with a diploma in practical nursing. She is employed at Mayo Clinic Health System in Albert Lea.

The groom is a 2003 graduate of United South Central High School and a 2006 graduate of Riverland Community College in Austin with an Associate of Science degree in law enforcement. He is employed at Wells Police Department.

A wedding trip was taken to Fort Walton Beach, Fla.