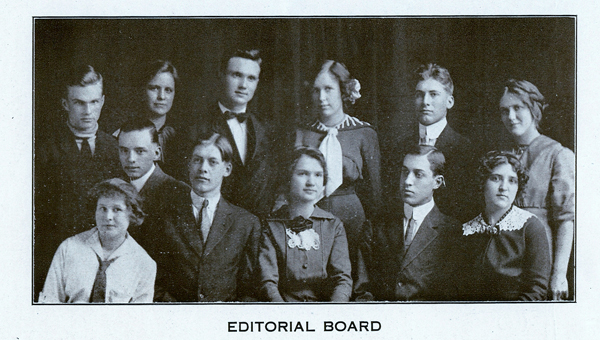 Shown is the editorial staff of the 1912 Ahlahasa. -- Photos courtesy of the Freeborn County Historical Museum 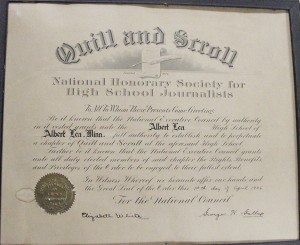 The Ahlahasa is a charter member of the international high school journalism honor society, Quill and Scroll. The society formed in 1926.

The Ahlahasa, an award-winning publication, had its first issue in 1912. The name comes from the initials of the high school — ALHS for Albert Lea High School — creates Ah La Ha Sa, or AHLAHASA. The name has been seen in different formats throughout the years.

The first issue was magazine-like, and then the Ahlahasa name was used for several years for the yearbook. Since the 1930s the name has been used for the student-run, student-made newspaper.

The newspaper, like journalism, has seen many changes over the last century. One alumnus, Tom Jones, remembers his time fondly. He was sports editor and in advertising sales at the paper when he was in high school. He graduated in 1980.

“People that I met then I’m still friends with today,” Jones said.

He also got some great experience that helped him in his career. After attending school for marketing, he worked in ad sales at the Albert Lea Tribune.

“It just really began my love for that,” Jones said.

Jones somehow ended up with a plaque that had been in the newsroom that has 20 years of winners listed for who had the most column inches each year. Since he wrote stories and sold ads, Jones ended up with quite a few inches one year — 932.5 to be exact, he said.

“I always found newspapers and advertising to be exciting,” Jones said. 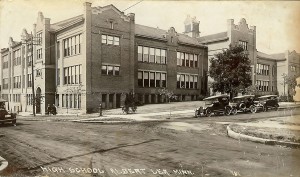 Albert Lea High School as it looked in the early 1900s.

His staff adviser was Judy Knudtson, who was the Ahlahasa adviser for more than 20 years. She started in the fall of 1971 and said she was drawn to helping the kids with the newspaper because she had majored in journalism in college and worked on her own high school newspaper and yearbook. Her favorite part of all those years of advising wasn’t hard to think of.

“The kids — they were all wonderful,” Knudtson said.

Knudtson said newspapers were put together much differently when she started in the 70s. Technology changed a lot into the 90s, and students were using computers to help make the paper. But they were still in darkrooms making photographs, and other techniques today’s high school students would think of as antiquated.

Knudtson said that she enjoyed working with the students but that she wanted to be sure that credit went to other advisers like Edna Gercken, Liz Keeling and Scott Winter, to name a few of the more recent advisers.

Another former staffer who worked under Knudtson was Dean Christianson, who graduated in 1976. He was editor in chief as a senior and said he often worked three hours a day on the newspaper during the school day.

“We had a lot of after-school work there, too,” Christianson said. “It was a pretty big staff.”

In his time at the Ahlahasa, it published every two weeks. Christianson said he uses some skills he learned and cultivated while on the Ahlahasa staff.

“I’ve always used writing and creativity from the Ahlahasa in whatever position I’ve been in,” Christianson said. 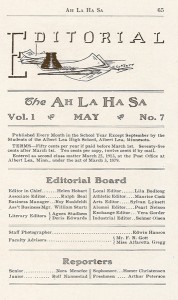 Shown is a page from the 1912 Ahlahasa that lists its staff members and cost: 10 cents per copy, 12 cents if by mail.

The Ahlahasa in its current print form would be discernible to those students who first started it in 1912, but it has changed much over the years. Now it includes an online version at the paper’s website and can be seen on social media as well. Its current adviser, Riley Worth, has been at the helm for nine years. He’s been working to keep up with the changing aspects of the newspaper industry to be able to be teaching the most updated practices.

“It’s a changing business,” Worth said.

This will be the third year the newspaper has had a website, and it even has a website editor on staff. Worth said that while newspapers used to cultivate good writers, staff must now be more well-rounded in all types of media, like photos, videos, web work and more.

“But as a learning opportunity, the Ahlahasa in its traditional form is still extremely valuable,” Worth said.

It publishes around seven times in a school year. Worth said that even though some national newspapers are going to online-only formats, he doesn’t see that for the Ahlahasa in the near future. It maybe happen sometime down the road in the next decade, but he hopes it doesn’t so that he can continue to teach students about printed newspapers and their value.

“It still teaches writing well and succinctly and how to write for an audience,” Worth said.

Even though he cares about the print edition, Worth is also concerned about keeping up with changes in journalism. Worth said that this year the Ahlahasa staff will partner with Tiger Vision to have that class create videos to be seen on the paper’s website.

And Worth also understands the importance of celebrating the newspaper’s 100th year. He said that he and the students are willing to change, but they’re not willing to give up yet on the tradition that has been built.

“I can say with great confidence that we’re here to stay,” Worth said.

For the 100th anniversary, the students have been researching the history of the paper at the Freeborn County Historical Museum and plan to put together a special section this year. Worth would also like to coordinate a celebration early in 2013 for any alumni to come, visit with each other and share memories of the Ahlahasa. Anyone interested in learning more about the gathering or helping Worth find Ahlahasa alumni can contact him at rworth@albertlea.k12.mn.us.