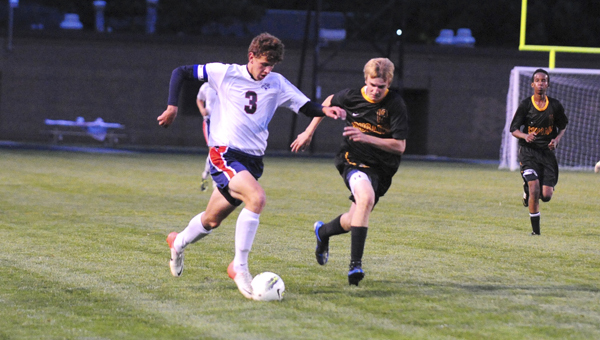 It has been at least five years since the Albert Lea boys’ soccer team has beaten Mankato East, and on Tuesday the Tigers put a stop to the streak.

Albert Lea beat the Cougars 5-3 after two goals by Tyler Shaw and one goal each by Tyler Vandenheuvel, Tim Furland and Nick Hagen-Erickson.

“We made our mark in the Big Nine now,” said Tigers head coach Joe Squires. “That put a little bit of a target on our backs and we’re going to have to step it up for the next game.”

Furland scored the first goal of the game with less than two minutes remaining in the first half.

The second half saw more action with the Tigers scoring four more times and the Cougars scoring three.

Shaw attempted a hat trick with 21 seconds remaining on the clock, but his kick missed the goal.

Squires said the way the Tigers were scoring, making quick break goals, worked to Mankato East’s advantage, to the point it let the Cougars get on the scoreboard.

“They would get the ball and slow it up a little bit and then would counter,” Squires said.

The teams were even on shots in the first half and Albert Lea outshot East in the second half 12-8.

“The game got a little frantic, so that made defending a little scary, but we stepped it up big,” Squires said.

According to Squires, several players stepped up their performances for the Tigers for their big win including Shaw and Furland, mid-fielders Hagen-Erickson and Cesar Herrera and Curi Lestrud and Parker Thompson on defense.

“Parker was making great offensive runs even though he’s back in defending,” Squires said.

Another change in the boys’ game was the athlete manning the goal. Foster Otten played his first varsity game as a goalkeeper. He saved seven goals. The Tigers’ usual goalie, Nate Hogstad, is waiting out a head injury from Saturday’s tournament.

“Foster had quite a few great saves that kept us going and as a freshman performed amazingly well showing confidence to own crosses in the 18 box,” Squires said.

The Tigers’ next game is at Mankato West on Thursday. The game is scheduled for 5 p.m.

See a gallery from the Tuesday game at AlbertLeaTribune.com.