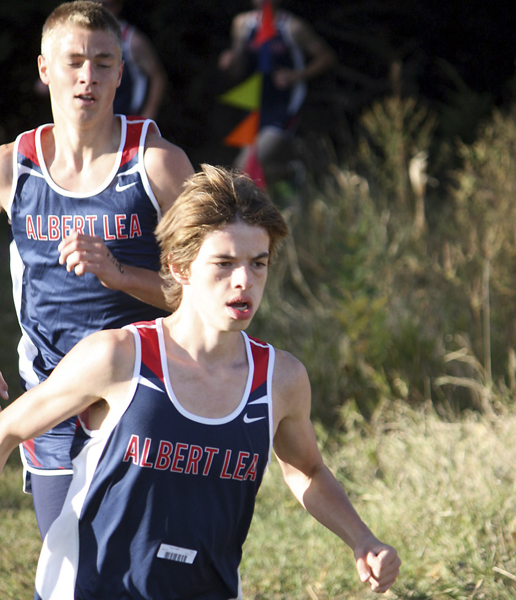 Brandon Bonnerup, left, and Caleb Troe run in a meet in Fairmont on Monday. -- Bryce Gaudian/ For the Albert Lea Tribune

The Albert Lea boys’ and girls’ cross country teams competed in a four-team meet in Fairmont on Monday.

The boys finished first with a score of 28 followed by Mankato West, 33, and Fairmont, 77.

The girls were close to a first-place finish as well with a score of 33, but were edged out by Adrian, which scored just one point less.

Jim Haney, the team’s head coach, said the boys had eight runners finish in the Top 15 and three in places six through eight.

“It was a great effort for these young men,” Haney said. “They dominated the race, and I was more impressed by the drive and determination the boys had at the end of the race.”

While the girls’ team didn’t get first place, one of its runners did.

Senior Chrissy Monson won the girls’ race with a time of 15 minutes, 30.4 seconds.

“She took over the race at the 800-meter mark and won the race easily,” Haney said.

The results showed that including Monson, the girls had six top-12 finishers.

“I was so happy the girls did well,” Haney said. “Most brought home some hardware and it was fun to see them rewarded for an excellent effort.”

The team will travel to Winona on Saturday for its next meet.

The Albert Lea girls’ team is the defending champion of the race and Haney said they are looking forward to running in it.