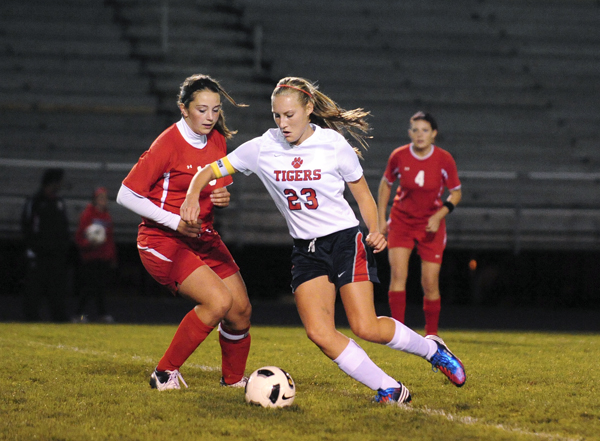 Albert Lea’s Katie Williamson controls the ball during the second half of the Tigers’ game against Mankato West. -- Brandi Hagen/ Albert Lea Tribune

The Albert Lea girls’ soccer team scored two goals in the second half of its home game Thursday before the clock ran out and Mankato West took the 3-2 win.

“We found out we have a strong will,” Tigers head coach Rick Barnhill said. “To get down by three goals is really really bad in the game of soccer. It’s very psychologically damaging. For us to come back and have a chance to equalize with still 10 minutes on the clock is probably the best thing that’s happened to us this year.”

“West just got the maximum out of the minimum tonight,” Barnhill said. “They’re probably the section favorites up there with East, but now we know that at least on this field and this particular night that we can play with them.”

Scoring in the second half for the Tigers was Gretta Johnson and Becca Dup.

“To recover and respond was just exactly what we needed at this time in the season,” Barnhill said. “Goals have been really hard to come by this year so I’m really pleased by the effort.”

Barnhill said the Tigers are lacking their normal power because of several injuries, including last year’s top scorer Brooke Hanson.

“We’re trying not to use it as excuses, we’re just trying to play through it and see what we can do,” Barnhill said.

The Tigers play their next game in Faribault Tuesday at 5 p.m.