Going from being appalled at the lack of knowledge, factual history and concern of the current Council, I’ve gone to being determined that the community be informed of what is and has taken place at Bancroft Park. Also, to counteract the comments made by a Mr. Andy Richardson. guest columnist in the Aug. 23 issue of the Albert Lea Tribune. I strongly feel that some of the questions are questions many members of our community want answered and some of the information, things they need to know. 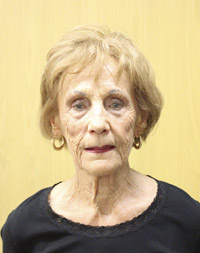 There are now 36 holes of disc golf at Bancroft Bay Park. There are 18 holes of disc golf at Riverland Community College. Are 54 holes of disc golf needed for the disc golf community? To cut trees and undergrowth to make way for the new 18 holes only exacerbates the mistake. It is a little surprising that the Albert Lea Parks and Recreation Department would turn the keys to the park over to a bunch of volunteers, unsupervised, to do their destruction over a series of weekends. Could part of the reason be that Tim Engstrom, editor of the Albert Lea Tribune and founder of the Flying Lea Disc Golf Club, also sits on the Parks and Recreation Advisory Board?

Ross Brandt, course designer and owner of TeeBoxx LLC, sells the equipment for the game. Obviously this expansion has provided financial gain for his company. On Feb. 27 Brandt and Engstrom presented the proposal to expand the disc golf course in the upper part of Bancroft Bay Park.

While I would agree that disc golf is a wholesome and popular sport, it can hardly be argued that it falls under the category of passive recreation or is keeping with the purpose of the park. Removal of vegetation and installation of concrete tee pads further remove the sport from that definition. Simply put, disc golf is a competitive sport, particularly if it involves a tournament. While disc golf has its place, this definitely isn’t the place. The island was acquired as a nature park and until re-designated should remain a nature park.

Mr. Richardson states that the main issue is the sharing of the park. He clearly does not view the destruction of natural habitat as a conflict of uses. It has become not so much an issue of sharing, as simply turning the keys to the park over to the disc golf zealots for their personal use.

So for his information and the public, here are the real facts:

1. The “island” of Bancroft Bay Park has history. It is an ancient American Indian hunting and gathering campsite of the Woodland Period (1000 B.C. to 1000 A.D.). It received $230,000 in state and federal grants and was a top priority of the state when developed as a passive natural park in 1974. The lower part of the park was purchased in 1984. Let’s not confuse the two parcels of land.

2. Fountain Lake is on the federal impaired waters list. When storm water drains from a construction site where soil has been disturbed, it carries sediment that harm the lake. Construction sites near specially protected and impaired waters require additional controls, conditions or an individual permit as determined by the Minnesota Pollution Control Agency.

3. There will be continued erosion resulting from compaction caused by continued traffic on the shores and slopes as a result of errant discs.

4. This project was misrepresented to the City Council and to the public. Here are the facts withheld about the plan to groom the course into a tournament-approved PDGA gold course along with the PDGA requirements to achieve this title: 20-to-40-foot cleared fairways, 35-foot clearings around each basket, poured concrete tee boxes that measure 5 feet wide by 12 feet long. These details were withheld until after it was approved by the City Council, giving the impression that everything was finalized and there should be no further dialogue.

Printed in the Albert Lea Tribune on April 12: “Council didn’t OK concrete tee pads.” The map of the course was also printed after the approval. The map shows the green area undisturbed with no fairway clearings or setbacks only light yellow arrows indicating the path of the disc, barely legible.

This expansion is not for the kids of Albert Lea. Tell the truth to the public, the gold-rated PDGA course is for the most advanced, experienced players in disc golf. What will displace the wildlife is the constant disturbance of the disc players in their habitat. Disc golf is not wildlife viewing. Playing on this course will and is flushing the wildlife from the park.

And to Mr.Richardson’s comments, I wonder if the city considers dedicating 80 acres of the public park to 36 holes of disc golf sharing the park with the general public? Also, should the taxpayers maintain 54 holes of disc golf on public land to serve the disc golf community?

I haven’t even touched on the question of whether tournament golf is a profit-making enterprise. If so, who gets the profits or incidentals, such as will be the park be closed during this enterprise making it unavailable to the general public? And who is responsible for the safety of all involved?

Deanne Winegar has resided in Albert Lea since 1956.