Here is an update on my son, who had to be flown to Rochester on Aug. 17, the day he was born, and on my wife, who was also in hospitals. 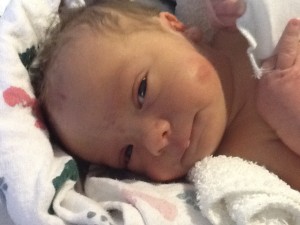 Jasper Jere Engstrom opens his eyes in the NICU on his third day.

The back story: Jasper was born about a month pre-term and had respiratory distress because his lungs weren’t fully developed. He also had to be tube fed until he was able to drink Mommy’s breast milk by bottle for a full day. He was discharged Aug. 27. In between he was in the neonatal intensive care unit at St. Marys Hospital and the intermediate special care nursery at Rochester Methodist Hospital. Lisa had high blood pressure before and after the birth. She also developed a spinal headache as a result of a painkilling shot in her back, and a blood patch resolved that.

Babies lose weight at first before they gain weight. Jasper now is back above his birth weight and seems to be quite a happy baby. Mommy is doing well. Her blood pressure is not ideal but is better.

I want to remark how impressed I am with the medical professionals we have here in Albert Lea. Probably one of the most-scared moments of my life happened when Jasper was born. I didn’t really show it on the outside because I didn’t want Lisa to see, but I could see what was happening in the birthing room.

Jasper didn’t twitch like a normal baby. He flopped more like doll or a plush toy. He was having trouble breathing and was sluggish due to blood-pressure medication Lisa had been given.

The doctors and nurses at our hospital acted swiftly to get him oxygen and monitor him. They explained to Lisa and me what was happening. And they were swift to care for Lisa, too.

It wasn’t like: Oh, we have a baby in distress, let’s ignore the mother. No, we had two doctors in the room, one for mom and one for the kid. Nurses were pragmatic and double-checked with each other before many steps they took.

When it was clear that respiratory distress was part of the situation, they decided to send him to the NICU at St. Marys. Everyone at The Baby Place maintained a helpful attitude and reassured us of the great care Jasper would get in Rochester. One nurse said the NICU handles babies born many more weeks pre-term than Jasper.

And, yes, he did get great care. And, yes, we saw some itty-bitty babies there.

Many readers of my column two weeks ago noticed I didn’t like what a fill-in obstetrician told Lisa. She was having that headache I mentioned and asked point blank if her intrathecal narcotic block (a shot in her back) was the cause. The fill-in doctor told her no, prescribed ibuprofen and discharged her. Unfortunately, she was admitted the next day in Rochester, told the cause of the pain indeed was the shot and was given the blood patch.

Her father, who had a lifetime career in the medical field, even said, “They blew that one.”

I want readers to know that I don’t blame the person who gave the shot, even if it took four tries. From my Army days I knew that even finding a blood vessel can be tough, let alone spinal layers. That’s just part of a difficult shot. I also want readers to know I think highly of the medical staff in Albert Lea. They were always top-notch and caring. My beef was and is with the fill-in doctor from out of town who didn’t even consider what the patient was asking. That isn’t the Mayo Clinic way, and I understand my concerns have been addressed.

Jasper is cute as ever, hungry as can be and breathing just fine. Thank you for the prayers, and thank God for the child.