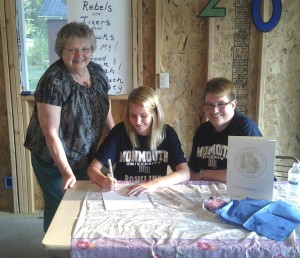 Mariah Jacobson, center, has signed a national letter of intent to attend Monmouth University in West Long Branch, N.J., to bowl with the school’s NCAA Division I women’s team. On the left is grandmother Jeanette Parriott and to the right is her mother, Kari Jacobson. Jacobson is a 2012 graduate of United South Central who competed with the Albert Lea Tigers’ high school bowling team and was a member of the Albert Lea girls’ team that brought home a state championship in 2012. In addition, Jacobson was a member of the South Central All-Conference team that won the state championship in 2012. Her highest game record is 268 and her highest series recorded is 696. In July Jacobson competed in the National Junior Gold competition in Indianapolis. At Monmouth University, Jacobson plans to pursue a major in criminal justice with a minor in homeland security. -- Submitted