The memorial service for David John Schmitz of Albert Lea will be at 11 a.m. Monday at Grace Lutheran Church in Albert Lea. The Rev. Andrea Myers will officiate. Interment will be in the East Freeborn Cemetery. Visitation will be from 3 to 6 p.m. Sunday at Bonnerup Funeral Service as well as one hour prior to the service at church. Military honors accorded by Albert Lea veterans organizations. 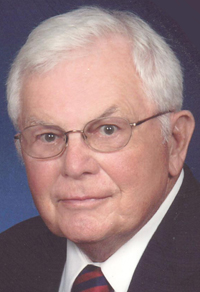 David Schmitz passed away on Sept. 4, 2012, at Good Samaritan Society in Albert Lea. He was 84 years old.

David was born on July 7, 1928, in Erie, Penn. The son of Harold and Virginia (Kreider) Schmitz, he attended Mill Creek Schools before joining the Navy in 1947. While in Long Beach, Calif., he met his wife Carolyn Dahl and the two were married on Aug. 20, 1953, in Las Vegas. Together they had four wonderful boys.

David and his family moved frequently throughout his 20 years in the United States Navy. After spending time in California, they moved to the east coast, living in New London, Conn., and Norfolk, Va. They moved back to the west coast again spending time in Pacifica and Vacaville, Calif., before finally settling in Albert Lea in 1972.

David was very proud of his time served in the United States Navy. He was a chief petty officer, fought in the Korean war, served aboard a Navy destroyer and five submarines and was a member of the admiral staff. After retirement, he was a scout executive for the Boy Scouts of America and spent time working for Wilson & Co. and Samson Dairy.

David loved gardening, boating, traveling, beekeeping and his grandkids. He was a strong, boisterous, worldly man who will be deeply missed.

He is preceded in death by his parents; brothers-in-law, Paul and Alton; and sister-in-law, Gloria.