Memorial services for Dorothy E. Hanson of Albert Lea will be at 1:30 p.m. Tuesday at the Bonnerup Funeral Service Chapel in Albert Lea. The Rev. Kent Otterman will officiate. Friends may greet the family one hour prior to the service at the chapel. Interment will be in Hillcrest Cemetery, Albert Lea. 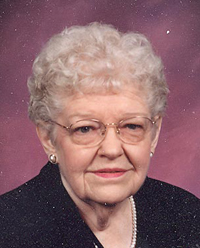 Dorothy was born July 4, 1925, in Albert Lea, the daughter of William and Flossie (Randall) Meyette. She graduated from Albert Lea High School in 1943. On Dec. 7, 1946, she was united in marriage to Earl V. Hanson in Hayward. Dorothy worked as a bookkeeper at Spurgeons for 24 years; retiring in 1987. She was a member of Grace Lutheran Church and Royal Neighbors of America. In her free time she enjoyed making greeting cards and crocheting.

She was preceded in death by her parents, husband Earl and two sisters; Florence and Marie.

Memorials preferred in lieu of flowers to the Albert Lea Good Samaritan Center.