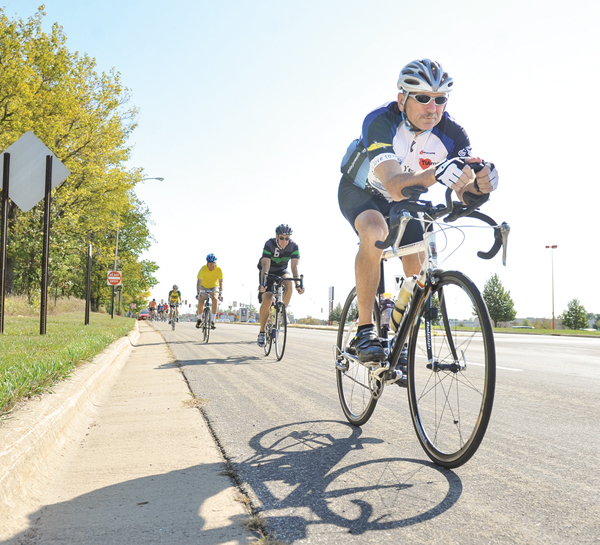 Bikers head out of Austin past Target Saturday morning as they take part in a ride that was part of RE-Fest. -- Eric Johnson/Albert Lea Tribune

AUSTIN — Area residents had some new and old ways to learn about conservation and green living Saturday. 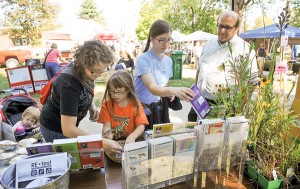 Linda LaVallie, from left, Elizabeth LaVallie and Anne Johnson look through items at a booth by Jim Styles at RE-Fest at Riverland Community College Saturday.

The fifth annual RE-Fest was held at Riverland Community College, and for the first time the RE-Fest Ride was added to the slate of events.

“We thought it would be fun to tie it in with the RE-Fest day because biking is a part of that same thing where it’s environmentally sound; it’s too good to get outside and exercise,” Bonnie Rietz said.  “You’re not using gasoline and all that.”

Rietz said she and Jerry McCarthy, the ride’s co-chairwomen, thought the ride would be a good way to raise scholarship funds for the Riverland Foundation while aligning with RE-Fest’s goals.

A four-mile ride was held to appeal to families, and there were also 20-mile and 50-mile rides. Families paid $50, and individuals paid $25 for the ride. 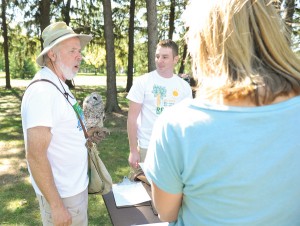 All the money from the ride went to foundation for scholarships in the wind turbine program.

Rietz said she hopes the ride will remain a part of RE-Fest in the future.

“We hope to have it again next year and tied with the RE-Fest again,” Rietz said. “This is the first annual, we hope.”

Kelly Lady, one of the RE-Fest organizers at Austin Utilities, described the event as a good chance for the public to learn about ways to conserve and take care of the planet.

“I think people just have a lot of questions, and everybody wants to take care of the earth and learn ways to do that,” she said.

Many of the traditional RE-Fest activities returned, like a number of vendors and seminars on a variety of activities.

Along with other topics, Austin Utilities was promoting tap water and its value over bottled water.

Along with supporting tap water, she said it’s another way to show people to reduce their bottle usage.

“Austin Utilities has great water,” she said, noting that they don’t have to treat it, but they are required to add chlorine and fluoride. “We have great, pure spring water in this community.”

Despite its popularity, one part of RE-Fest didn’t return this year.

Even though they filled five semis last year, the recycling drive was discontinued because Lady said the Riverland grounds became too congested with limited traffic flow, and it took up a lot of volunteer time.

“All of our volunteers got pulled out there,” Lady said. “We were so short on volunteers.”

Free recycling drives will likely return in the future, as Lady said the city has taken over the service.