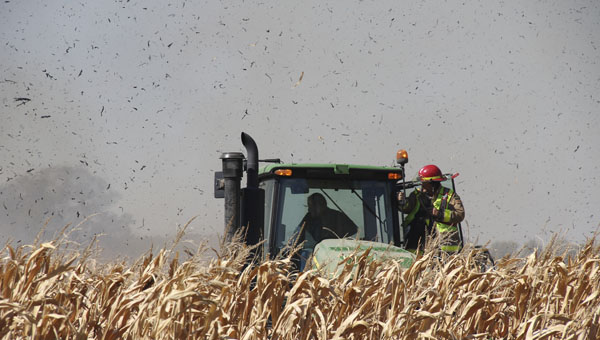 A firefighter rides a John Deere tractor driven by neighbor Nordean Krueger on Thursday in a cornfield on fire west of the South Margaretha Avenue neighborhood in the south end of Albert Lea. -- Tim Engstrom/Albert Lea Tribune

A fire started in a burn pit Thursday caught about 20 to 25 acres of corn on fire in a field to the west of the South Margaretha Avenue neighborhood.

The call for the fire went out at 1 p.m. with Albert Lea, Albert Lea Township and Glenville fire departments responding. 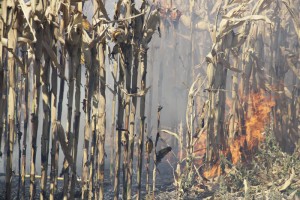 The wind blows from the south, pushing a fire through a field west of the South Margaretha Avenue neighborhood. Firefighters set up a perimeter to protect homes. -- Tim Engstrom/Albert Lea Tribune

Clarence Tover of 2306 Larson Ave. said he was burning bushes in his dug-out earthen burn pit. He resides at the north end of the Larson Avenue dead end and farm fields are on the north and west sides of his property.

He said the flames caught some dry leaves and then the corn.

The wind around 1 p.m., according to the automated weather station at the Albert Lea airport, was out of the south at 7 mph. 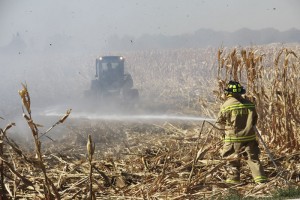 The corn burned toward the north-northeast and eventually stopped at Margaretha Avenue, which created a fire break. On the other side of the street, residents stood outside their homes watching the firefighters douse the flames.

Art Anderson of 2217 S. Margaretha Ave. was among them. He said his wife, Rose, called out that the cornfield across from their house was on fire. He looked out the picture window toward the Larson Avenue dead end and saw the flames and smoke eventually come toward their home.

“We were worried,” he said. 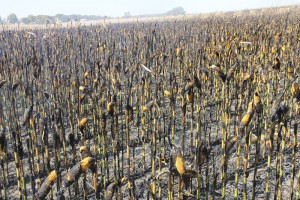 About 20 to 25 acres were blacked Monday by flames Thursday, shown here before a tractor and cultivator knocked down the damaged corn plants. -- Tim Engstrom/Albert Lea Tribune

The field belongs to Andy Bakken. Two of his neighbors, Nordean Krueger and grandson Justin Krueger, came to help fight the flames. Nordean drove a John Deere tractor with tracks instead of wheels into the field at 1:20 p.m. Behind it was a cultivator, and he made fire breaks and knocked down blackened corn.

Justin entered the field with a skidloader and rooted out hot spots on the ground. He said they came as soon as they heard there was a fire.

“We just put out a fire a couple of weeks ago,” Justin said.

Lt. Al Schallock of Albert Lea Fire Department said the fire breaks the Kruegers made “were a tremendous help.”

He said the firefighters from the three agencies had to douse the flames while they also stood by to protect homes. He monitored the fire’s approach from the roof of a house on Larson Avenue.

“We are lucky we didn’t have a heavy wind today,” Schallock said.