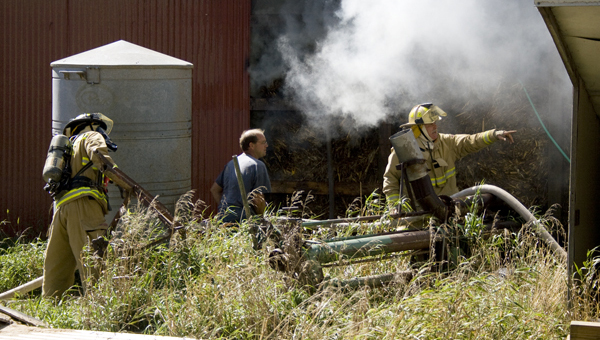 The fire, at 13687 Freeborn County Road 5, started at 2:10 p.m., but with high winds and dry conditions, continued for about five hours.

Glenville Fire Chief Craig Rayman said at a few points, the firefighters appeared to have knocked the fire down, only to have a large gust of wind bring the fire back out.

Winds were reported as high as 22 mph on Monday.

Rayman said the fire started when someone at the farm was chopping up the ground bales.

“He heard a bang and saw sparks, and of course it’s so dry, it didn’t take much,” Rayman said.

He said firefighters had to pull out almost every one of the hay bales in the shed and spray them down with water. He did not have an estimate for how many bales were in the shed.

He said no one was injured, and the building was saved.

“Thank goodness for mutual aid in Freeborn County,” Rayman said. “Without the other departments helping us, we would have lost the building.”

The property is listed to Allen Knaack.

Rayman advised people to be cautious with the dry and windy conditions.

The Freeborn County Sheriff’s Office this week issued a ban on all burning permits. Recreational fires and grilling are still allowed.