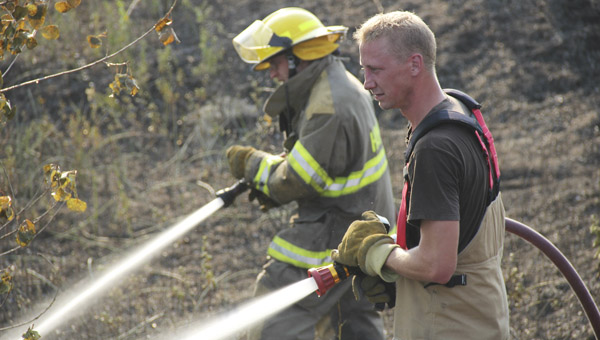 Firefighter Dave Hoffman of the Albert Lea Township Fire Department douses a fire lurking beneath a small dump that was in the middle of a grass fire Tuesday at 17315 760th Ave. south of Albert Lea. -- Tim Engstrom/Albert Lea Tribune 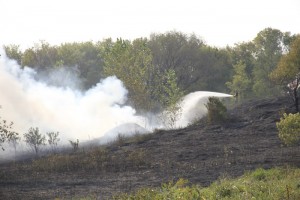 Smoke and steam rise Tuesday from the remains of a fire on a field of grass south of Albert Lea about a half mile south of 19th Street. -- Tim Engstrom/Albert Lea Tribune

The blaze damaged four acres of land off of 17315 760th Ave. The driveway that leads to the grassland is off of a dead-end gravel road about a half a mile south of 19th Street, a border of Albert Lea city limits.

Cory Johnson, who was at the property when the fire started, said he was mowing a path around the property just before 4:30 p.m. when flames started coming out of the base of the mower’s engine. He said he tried moving the mower out of the grass but then the engine quit.

Johnson said he then jumped off the mower and ran several hundred feet back to the garage to get buckets of water to pour onto the fire. However, when he got back to the field, he estimated there was a circle of fire probably about 10-feet wide. 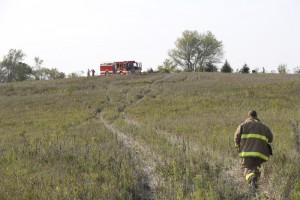 A firefighter walks up pathways Tuesday in a field of grass to reach an Albert Lea fire truck. -- Tim Engstrom/Albert Lea Tribune

Johnson said he normally mows at the property, owned by Randy Wright, on a weekly basis. This summer, because it has been so dry, it has not been as often.

Albert Lea Township Fire Chief Chuck Karl estimated that at least 1 1/2 acres were burning by the time firefighters arrived. He said he was grateful there were not high winds.