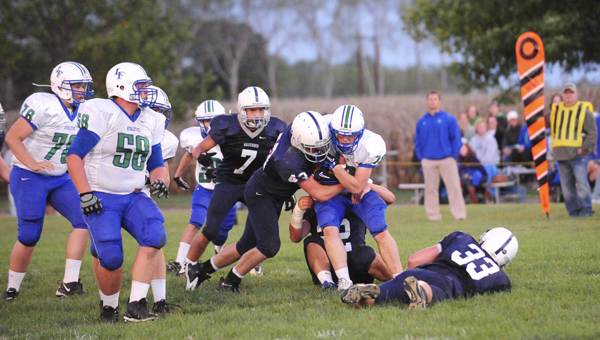 Four Glenville-Emmons players tackle Andy Davidson of Lyle-Pacelli on Friday night as the Wolverines shut out the Athletics 50-0.

GLENVILLE — The Wolverines had such a lead on Friday against Lyle-Pacelli that going into the fourth quarter, the younger kids had a chance to get some playing time.

“We saw a lot of good things from them,” said Wolverines head coach Mike Olson. “They weren’t afraid to hit, block or tackle.”

Olson said the team’s strategy wasn’t to have a complete shutout, but the younger kids came up with a big stop at the end of the game when the Athletics were within the 10-yard line to do it anyway. 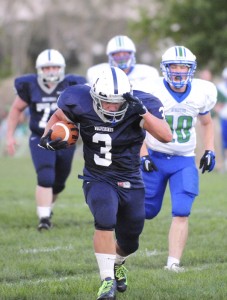 Derek Olson takes off running in the second quarter to score the Wolverines’ third touchdown Friday against Lyle-Pacelli.

Olson said it was because of a few things.

Since their last game, the Wolverines worked on blocking and tackling.

“They were blocking for the whole play, every play, just like we wanted,” Olson said. “And, everybody was tackling more the way we’ve taught them in practice.”

Derek Olson led the team with 173 rushing yardsand three touchdowns. All of Olson’s stats came from the first three quarters due to a sprained ankle going into the fourth.

Christian Voss was close behind Olson with 152 rushing yards and one touchdown.

Olson said Blake Lundmark really stepped it up for the Wolverines too. Lundmark made four tackles, was defensive in blocking and led as an example to the less experienced players in the fourth quarter.

Glenville-Emmons’ next game is scheduled for 7 p.m. Friday at Grand Meadow.