Gasoline prices on the rise 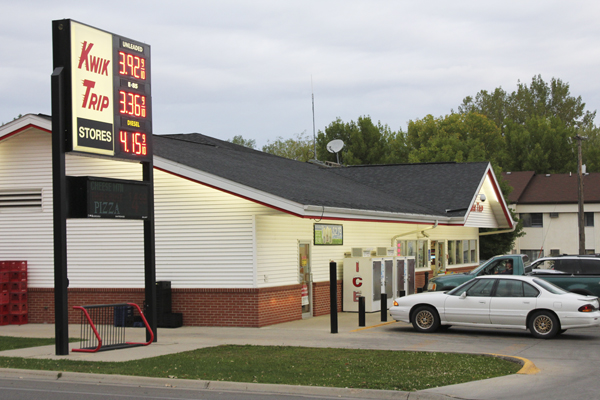 Cars pull up to the Kwik Trip station at Front Street and First Avenue this morning while a sign advertises gas for $3.92 per gallon. -- Tim Engstrom/Albert Lea Tribune

On Friday, gas prices averaged about $3.95 per gallon in Albert Lea. Austin’s prices were similar, but Owatonna was a touch lower at $3.91.

This morning, the Albert Lea prices were at $3.92.

Local gas station owners and managers said they have little control over prices, noting that it largely depends on the companies they buy their fuel from and the market.

So far, few customers are voicing their concerns about the prices at gas stations.

“Nobody’s really complaining yet,” said Crissy Busker, a manager at the Ankeny’s Mini Mart No. 5 on 14th St. NW in Austin.

Busker said people are likely getting more used to fluctuations in gas prices.

Bill Geobel, manager of the Kwik Trip at Main Street and Garfield Avenue in Albert Lea, said when prices get over $4, that’s when consumers will grumble.

“It hasn’t really been much of an issue yet,” he said.

The spikes in fuel costs could be short-lived.

The U.S. Energy Information Administration reports retail gasoline prices should begin declining later this month as the market recovers and transitions from summer-grade to winter-grade gasoline. In the last quarter of 2012, gas prices are projected at an average of $3.58 per gallon.

The average price of gasoline jumped by more than a nickel in the Twin Cities to $3.96 Thursday, higher than the U.S. average and just pennies shy of the all-time Twin Cities record average of $4 a gallon set in 2008, according to AAA’s Fuel Gauge Report.

In a few stations around the metro area, gas was selling for above $4 a gallon, according to TwinCitiesGasPrices.com, a website where motorists can report on posted gasoline prices.

Why? Not the unrest in oil-producing Libya that killed four Americans, including a U.S. ambassador on Tuesday, according to Gail Weinholzer spokeswoman for AAA of Minnesota and Iowa.

Instead, Weinholzer is blaming bad timing due to two overlapping domestic events.

First, the temporary shutdown of refineries, ports and oil rigs in the Gulf of Mexico for Hurricane Issac at the end of August constrained supplies, she said.

The Gulf supplies more than a quarter of the nation’s oil from either its offshore rigs or from imports that arrive by tanker, and the country still is feeling the hangover of that crimp in the supply chain through higher prices, she said.

Second, the petroleum industry is preparing to switch over to making cheaper winter-grade gasoline on Saturday, Sept. 15, she said.

Retailers with the limited quantities of very expensive post-Isaac summer-grade fuel in their tanks are trying to get as much as they can for it while they can, before they begin taking shipments of the winter fuel, Weinholzer said.

“The start of the switchover Saturday will start to put downward pressure on prices, and you will start to see a reduction in prices by the end of next week,” Weinholzer predicted.

The United States gets less than 2 percent of its oil from Libya, lessening the impact from that nation, the AAA spokeswoman said.

Meanwhile, the average price for a gallon of gas in the U.S. rose to $3.87 Thursday, the highest since April 21.

An overnight jump of a nickel a gallon used to be rare but since 2005’s Hurricane Katrina, gasoline prices have become more volatile, Weinholzer said.

Gas prices have climbed steadily over the summer, rising 53 out of 60 days since July 2, she said.

In the Twin Cities, the average price of a gallon of regular rose by nearly 20 cents since last week, according to AAA’s Fuel Gauge Report. The price is 21 cents higher than it was a year ago to date.