‘Give them a good shot’ 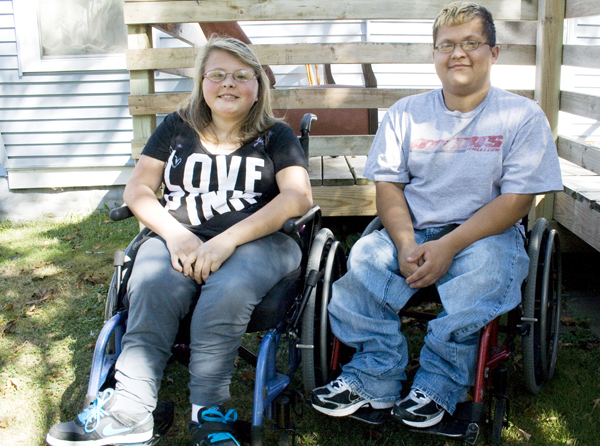 Jessica and Tony Trujillo sit in front of their home Thursday in Wells. The brother and sister both have spina bifida, which has restricted the use of the lower half of their body. -- Sarah Stultz/Albert Lea Tribune

WELLS — Tony and Jessica Trujillo of Wells are much like any other teenagers.

Jessica, 14, likes Facebook, hanging out with her friends, playing on the computer and going to movies.

Tony, 17, enjoys playing the Xbox, playing sports and being with friends.

But because they were born with the birth defect known as spina bifida, the two teenagers do not have use of their bodies from the waist down.

With spina bifida, the backbone and spinal canal do not close before birth, often causing paralysis in the lower limbs.

The teenagers’ mother, Jodi Trujillo, said Tony and Jessica have been through many surgeries and require ongoing medical treatment — which is costly.

With Jodi working reduced hours — she is working only about 30 hours every two weeks — and her husband, Fidel, not being able to work because of a back injury, the family is struggling to pay for the ongoing medical needs of their children.

DuWayne Kirchner, of Albert Lea, said he heard the story about the Trujillo brother and sister from his wife, and he felt inclined to help.

“We just need somebody to give them a good shot,” Kirchner said.

Kirchner said his wife helps push residents in wheelchairs into the chapel on Sundays at St. John’s Lutheran Home, where Jodi works. Jodi told his wife about her children, and the couple thought they could help.

He is hoping the community will step in to help, too.

“It’s tough because I’ve never been in a predicament where I needed to ask for help,” Jodi said.

Of immediate need is a hospital bed for Tony, which will help reduce medical complications such as bed sores.

Kirchner is sharing the family’s story with service groups and other employees at St. John’s. Though a formal benefit has not been set up for the family, he said if people would like to donate to the Trujillos, they can mail checks to him at 2731 Campus Lane. All donations are tax deductible.

The Albert Lea branch of Thrivent Financial for Lutherans will supplement all funds given.

Checks should be made out to Jodi Trujillo.