Funeral services for Glenn F. Ruble, 77, of Albert Lea will be at 1:30 p.m. Thursday at the First Presbyterian Church. The Rev. Dwight Netzer will officiate. Burial will be at Graceland Cemetery with military honors accorded by the Freeborn County servicemens organizations. Visitation will be from 4 to 7 p.m. Wednesday at Bayview/Freeborn Funeral Home and one hour prior to the services at the church. Online condolences are welcome at www.bayviewfuneral.com. 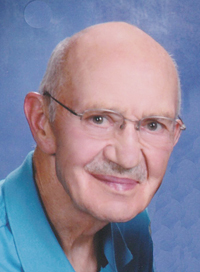 Glenn was born Feb. 14, 1935, at Naeve Hospital, Albert Lea, the son of Clifford A. and Dagmar (Olson) Ruble. Glenn was baptized in the First Presbyterian Church and confirmed in his faith at First Lutheran Church. He attended School District No. 39 through eighth grade and was a graduate of Albert Lea High School. Glenn was a lifelong resident of Freeborn County and farmed the family farm, which was settled by his great-grandfather in 1856. FFA and 4-H were an important part of his youth. Glenn served in the United States Army in Alaska returning home in 1956 to resume farming after the failing health of his father.

On Feb. 14, 1955, Glenn was united in marriage to Maureen Vyonne Wuerflein in Albert Lea. Glenn was an active member of First Presbyterian Church and over the years he was active in many agricultural organizations, among them, Farm Bureau, Dairy Herd Improvement Society, American Dairy Association, Freeborn County Holstein Breeders, Mid-American Dairymen Inc. and Farmers Home Administration.

The Freeborn County Fair was an important part of Glenn’s entire life beginning in 4-H and FFA with showing his registered Holstein dairy cattle. He continued to show open class dairy cattle for many years. He served on the Freeborn County Fair Board for 18 years, 15 years as president. He believed strongly in the healthy competition and the education that the fair provided and was constantly searching for ways to improve our fair. In the early 1960s Glenn was selected Freeborn County Outstanding Young Farmer. Glenn was proud of being the fourth generation on his farm and worked hard to improve his herd of registered Holsteins, the first of which were brought into Freeborn County by his grandfather, Fred S. Ruble in 1907. Glenn’s hobbies and interests included bowling, cribbage, the church dart ball league, golf, collecting and restoring John Deere tractors, refinishing furniture, deer hunting with his sons, grandsons and friends, and feeding and enjoying the birds. Glenn loved his children, grandchildren and great-grandchildren and was very proud of them. He enjoyed following their many activities.

He was preceded in death by his parents, Clifford and Dagmar Ruble; father-in-law and mother-in-law Milford and Vione Wuerflein; brother David A. Ruble; brothers-in-law: George (Bud) Hendrickson and Gary Vangen; and sister-in-law Julianne Vangen.

Glenn was a faithful servant of the Lord, a courageous and loving husband, father, grandfather and friend. He will be deeply missed.