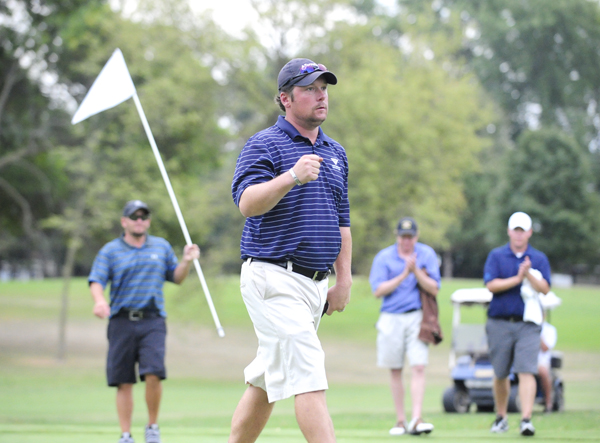 A battle between two friends came down to the last hole on Monday during the 85th annual Shortstop Golf Tournament championship round at Green Lea Golf Course. 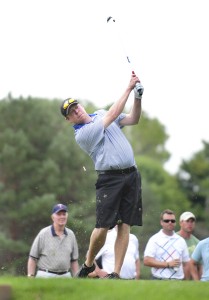 Andy Petersen tees off No. 8 at Green Lea Golf Course on Monday during the Shortstop championship round.

Pressure was on as Andy Petersen and Chris Baas, both of Albert Lea, putted on the No. 18 hole.

Baas had won No. 16 to go one up and Petersen won 17 to make play even again to start the final hole.

Petersen went first narrowly missing the hole and with a sinking feeling watched Baas hit his ball in to go one up and win the tournament for the sixth time.

The two golfers were tied in stroke play before playing the final hole, but Petersen said he didn’t get a very good drive off the last hole and had to punch-out.

“That’s what cost me,” Petersen said.

Competing in the tournament about 15 times, Petersen said this is the third time he’s placed second.

He said he was disappointed, but said it was a great match.

After struggling throughout the week on the first six holes, Baas claimed the championship title for the sixth time on Monday afternoon. 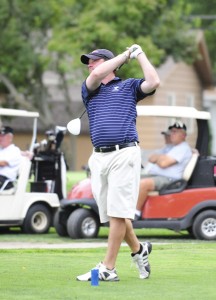 “That’s an accomplishment that I’m very proud of,” Baas said.

Baas said going into the tournament he was tense but feeling good.

“I knew I was in for a hell of a match,” Baas said. “Andy typically hits it so straight off the tee and he putts well too. I knew I had to make a lot of birdies.”

He said the pressure of the match helped him through and enjoyed the crowd of golfers that cheered on him and Petersen alongside each hole.

“It’s a real treat to play with all these people watching because we don’t get that opportunity often.

Jeff Elseth, the owner of Green Lea, said there were 128 players who played in the tournament and probably 150 watching the final round.

Baas’ win makes him the record holder of the number of titles won. Elseth said before this year’s tournament he was tied with a couple others at five wins.

For complete tournament results, see an upcoming edition of the Tribune.