‘It’s been a whirlwind’ 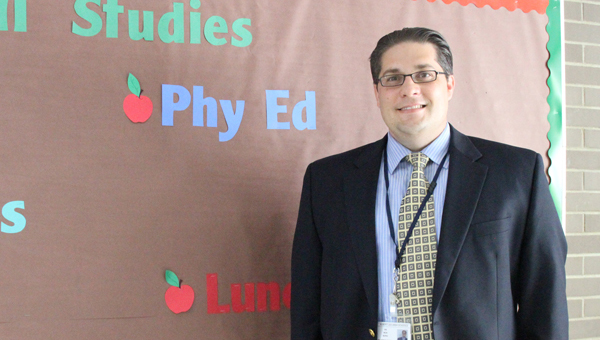 Halverson Elementary School has a new leader who’s anxious to meet students and staff and get to know them better.

Principal Nick Sofio hails from Shakopee School District where he was most recently an instructional coordinator for four years. He worked with staff in development, training and testing.

Before that he taught third grade in that school district for three years. After graduating from the University of Wisconsin-Superior with a bachelor’s degree in elementary education, he first worked at a charter school in St. Paul teaching fourth- and fifth-grade for four years.

Sofio also earned a master’s degree at St. Mary’s University in education administration. He received his principal license at that time, too. He said his time at the charter school, where he was also a school board member, made him want to try the administration side of education.

“Through that process it helped me decide to go into administration,” Sofio said. “It’s been enjoyable, but it’s different to go from teaching 8- and 9-year-olds to working with adults.”

Sofio said his first month in the district has gone well. He’s met with much of the staff at Halverson and said they’ve all been welcoming.

With the first week of school almost over Sofio said he’s hoping to get into the classrooms more and meet more children.

“It’s been great to see their smiling faces as they come to school each day,” Sofio said.

Before school started there was a picnic for students and families, and Sofio said it was a good chance to meet people informally and get to know people.

One of Sofio’s biggest goals is to help Halverson achieve more and do better, not only in the classroom, but also with testing like MCAs.

“The overall goal is to establish a culture where kids can be successful,” Sofio said.

Sofio started with Albert Lea School District in August. Previously Halverson’s principal was Matt Esterby. Superintendent Mike Funk said Esterby resigned earlier this summer before moving to Hastings for a job, which is closer to his family. Funk said Sofio is personable and is doing well in the district.

“I think he’s done a great job to start out with,” Funk said.

Sofio and his wife, Ferne, are still in the transition of selling their home in Prior Lake so they’re renting a place for now but hope to settle here soon. Sofio said he’s from a small town, Bessemer, Mich. He still travels there when he visits his mother, but he said he feels like Minnesota is his home now. That doesn’t mean he’s a Vikings fan though, because he still roots for the Green Bay Packers.

In his spare time he likes gardening and said he’s becoming a better cook the more he practices. He enjoys watching sports, and he and his wife sometimes go to theater shows.