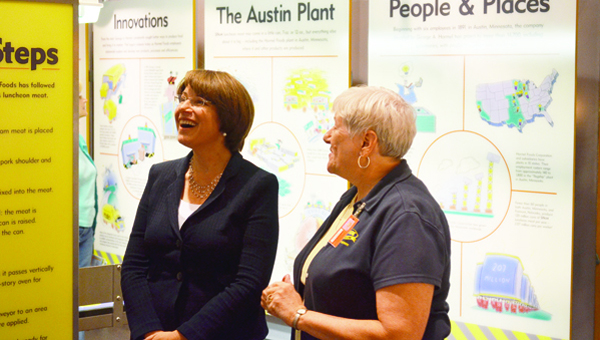 Klobuchar, D-Minn., made Austin one of the stops along her “Made in America” tour, which recognizes companies producing their products domestically and growing the job market for U.S. citizens.

“Companies willing to make things in America are what make the biggest difference in job growth,” she said.

The food industry did well during the recent economic downturn, and Spam is no exception, she added.

Spambassador Eleanore Gordon showed Klobuchar around the various exhibits at the museum, where she received a crash course on the history of Hormel Foods Co., samples of Spam and a viewing of the famous Monty Python skit. The tour ended with a stop by the gift shop and a can of the new Jalapeño Spam for Klobuchar to take with her on the road.

“Everyone knows it’s been challenging times,” she said. “Our job is to work with these companies again and help them make it easier.”