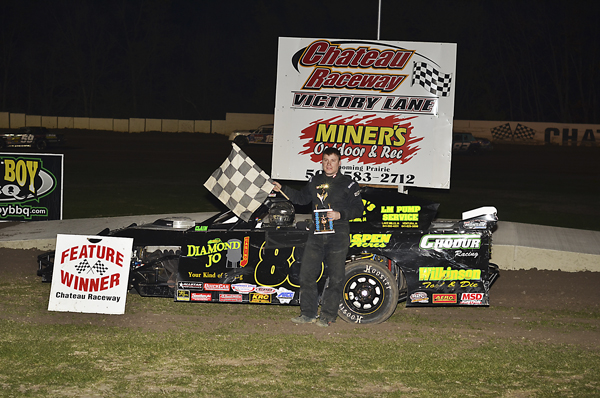 Nate Chodur poses for a photo after winning his first race of the year on April 6 at Chateau Raceway in Lansing. -- Buck Monson/Albert Lea Tribune

BOONE, Iowa — People race for many different reasons. Lake Mills resident Nate Chodur races for the love of the competition — but racing is about sportsmanship, too.

And at the Boone Speedway, he showed it.

In August on the dirt oval in Boone, Iowa, at the IMCA Super Nationals, which is like the Super Bowl of IMCA racing, Chodur had one of those new experiences affect him in a big way.

Chodur had his pit stall next to a fellow racer from Iowa Falls, Iowa. This racer was Tony Wagoner, and he had found out two months earlier that the cancer he had was terminal and he had only six months to live, according to his doctors. Wagoner had been sick most of the year, and one of the things on his “bucket list” was to race at the IMCA Super Nationals. His family and friends stepped up, got him a new car and helped him fulfill his wish. This would be the first time Wagoner would race this year.

After missing the feature race the first night, Wagoner’s troubles continued on night two of the Super Nationals when he was involved in a crash that resulted in him finishing fourth place in his heat race. Only the top-three finishers would make the transfer spot and be inspected in the infield to be qualified for the feature race that night.

The car was a mess, and they brought it back into the pit area to get it back together. And as the crew was getting the wrecked pieces off of the car and taking the damaged wheels off, over the pit speakers, fans could faintly here them call the No. 26 back to the infield to be inspected. Apparently two of the top three cars in Wagoner’s race were disqualified for whatever reason, and he was now in the feature race. But he first had to get to the infield right away. With the car all tore apart and the wheels destroyed, it wasn’t that easy.

“When Wagoner was called back to the infield after they announced he transferred into the feature, without hesitation, I rolled out my spare tires and helped with whatever they needed to get him back to tech,” said Chodur. “Later on, when they were back at the pits getting the damage fixed, we lent them a helping hand with whatever we could.”

Wagoner made the feature that night, and ran pretty well, as the whole crowd cheered for him and his family.

“To be a part of his inspirational story was an honor and something I will never forget,” said Chodur.

Chodur races in Mason City every Sunday night at the I-35 Speedway. In 2012, he won the track championship in the Sport Mod division.

He also races at Hancock County Speedway in Britt, Iowa, on Friday nights, and travels here and there when time permits.

“I love the new experiences that come along with racing each weekend,” he said.

A lifetime of auto racing

Chodur was exposed to racing as a baby.

“My dad decided to start racing in 1988, and raced limited late models up until he purchased a modified in the mid-90s,” said Chodur. “He raced until I took over the driver’s seat in 1998, and I have been racing with my dad ever since. Racing has become a family sport for us.”

Some of Chodur’s biggest racing accomplishments are being the only repeat winner of the $2,000 prize at Sport Mod Nationals, podium finisher at the IMCA Super Nationals, six-time track champion and 50 feature wins.

“It’s hard to top the feeling after winning a feature event,” said Chodur.

Every time Chodur’s car is at the track, his dad, Gary, and his mom, Deb will be right there watching him.

“Racing has become a family vacation for us,” said Chodur. “It is an extreme amount of work, but it is something we do as a family, multiple times a week.”

Chodur is an MIS consultant at ABCM Corp. MIS means management information system and relates to computer networks. He deploys and maintains workstations, servers and applications for more than 600 users.

When he isn’t racing, he looks forward to snowmobiling in the winter.

“When the snow flies, I absolutely love snowmobiling,” Chodur said. “Last year, I took a couple of trips to Wisconsin and a couple trips to the UP in Michigan, since we didn’t have anything down here to ride in.”

Being from Iowa, farming is also a passion of his. While growing up, his dad farmed, and during the last few years, he has helped local farmers with spring planting and fall harvest.

“I enjoy farming and wanted to experience the business end of it, so I’ve started farming a small portion myself,” said Chodur. “Even though it’s not many acres, I still enjoy it and would love to expand in the future.”

Ten years from now, he hopes to still be racing.