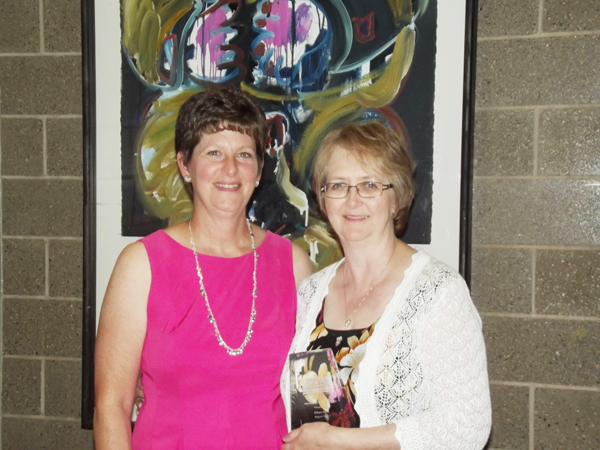 Pictured from left are Diane Heaney and Eileen Ness. -- Submitted

Eileen Nelson Ness was recently honored with an Advocate for Choral Excellence Award presented at the annual summer banquet of the American Choral Directors Association of Minnesota. The ACE Award was established to recognize the outstanding efforts of individuals who support the choral art in their communities. The ACE award is chosen from nominations from each ACDA district and helps to “bring to light” the creative ways people have nurtured the choral art.

Ness was nominated by Diane Heaney for her musical enrichment of the Albert Lea community throughout many years. Ness grew up in York, Neb., got her bachelor’s and master’s degrees at Juilliard in New York City in organ and an emphasis in choral conducting, and ended up in Albert Lea at First Lutheran Church as director of music activities in the 1970s. Ness has been the organist, choral director and director of music activities at four different churches in Albert Lea and has directed church choirs for 40 years. She has also directed the Albert Lea Cantori – an adult community chorus – for the last 33 years. They just celebrated their 40 years of existence this spring, and she has commissioned three new choral works to celebrate their anniversary season.

Ness created and directed the Albert Lea Area Community Children’s Chorus for local kids in grades third through eighth for 12 years. She provided a wonderful musical education and singing experiences for many youths. Her teaching inspired the young students to sing quality literature, sight read and perform with enthusiasm.

Ness has been a driving force in the Albert Lea Civic Music Association for the last 26 years serving as president and vice president, and on many committees. When Civic Music came into some significant money left by some patron estates, Eileen spearheaded a scholarship idea and created the student scholarship competition. Her newest project through Albert Lea Civic Music is to bring the Metropolitan Opera’s HD broadcast to town at the local Marion Ross Performing Arts Center. This will mean area opera lovers will be able to enjoy this exclusive viewing of operas from the Met here in town instead of driving to Mankato.

Ness is the go-to keyboard teacher in the area for advanced students.  Under her teaching, students make great strides in their technique and skills in both organ and piano. She has accompanied the high school choirs for many years and can always be counted upon for a reliable and musical performance. She helps out for solo and ensemble as an accompanist and vocal coach. Ness is involved with American Guild of Organist activities and plays organ recitals throughout the year, and she organized and directs the Stray Notes, a four member women’s ensemble. They sing lighter musical fare for community functions and concerts.

The award from the Southeast District of ACDA was presented to Nesse on Aug. 9 at St John’s University in Collegeville by colleague and friend, Heaney. Other recipients of the ACE award were Marcia Torning, accompanist in the Stillwater school district, Marcus Johnson, long-time choral music manager at Groth Music, Ted Masog, accompanist for the Bertha-Hewitt area community, James Swearingen, administrator at Chanhassen High School, and Jan Scovill, accompanist for the Anoka-Hennepin schools and community.