Love is never too late 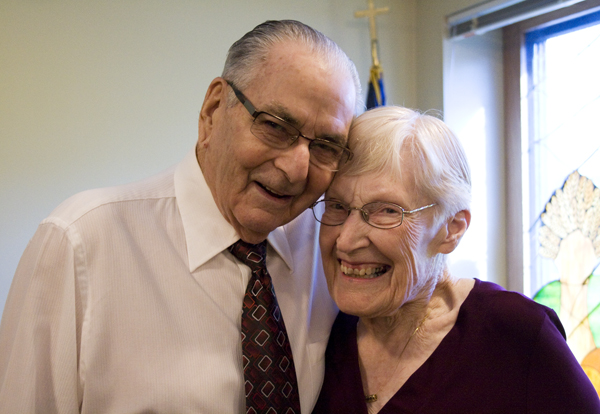 It’s never too late to fall in love.

That’s what two residents living in the senior apartments at Thorne Crest Retirement Community proved true Saturday as they married in front of a small group of family and friends.

Standing hand in hand in the Thorne Crest chapel, Larry McGill, 93, and Maurine Larson, 90, became Mr. and Mrs. Larry McGill. Then they sealed the ceremony with a kiss, a tight hug and smiles.

“It doesn’t happen very often where people of that age get married,” said Karen Anderson, sales and marketing director at Thorne Crest. “The residents have been so excited.”

Anderson said Larry and Maurine came into her office to tell her about their engagement about a month ago, and in the time since, they’ve been busy making preparations.

“Everyone was very surprised and happy for them,” she said.

Larry and Maurine first became acquainted in the 1990s when they were both previously married and living at Lake Chapeau condominiums. The couples went on double dates together.

Larry and Maurine became reacquainted in the last year at the Thorne Crest apartments. About six months ago, both widowed, they said they started developing romantic feelings for each other.

It wasn’t until about a month ago, however, that the couple decided to get married. They said one day they both had a dream of what they described as a beautiful wedding and took that as a sign for themselves.

The couple is planning a honeymoon cruise.

Maurine has two living daughters and one son, 11 grandchildren and three great-grandchildren.