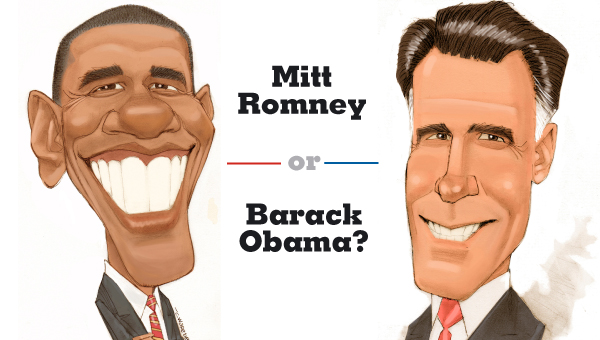 We asked readers to weigh in on the presidential election.

Who will you vote for to be president?

The Albert Lea Tribune asked readers on the streets, in gathering places and on Facebook who they were voting for and why. Here is what they said:

“I can tell you I’m not voting for Obama. It’s a tough decision because I don’t know if Romney is the one either. I will vote for the local elections more than anything.”

“I would vote for Obama. I don’t like any of the other options. Plus I think Obama has been doing a good job.”

“I wouldn’t vote for either. They don’t really live up and do what they say they’re going to do.”

“I’d vote for President Obama. Being a young person with a new family, it’s more important to me to be teaching kids manners and how we’re treating each other. The cool thing about President Obama is he has talked about personal responsibility. As a person who is biracial it’s also neat to have a black president. Plus Mrs. Obama is a fantastic role model when it comes to being a mother.”

“Neither. It’s still a toss up. They have to get down to business and stop slandering each other. It turns me off.”

“I’d vote for Mitt Romney. I’ve just heard a lot of good things about him.”

“Neither one. Neither one has any political background. Obama is doing what he wants to do, and the other guy is just there.”

“Can I choose neither? I don’t think either is a good choice. The lesser of two evils is still evil.”

“Obama. He’s doing more for the people who don’t have the money, for the older people.”

“Obama because I’m a Democrat and because I am part of the working class and I am not rich.”

“Obama because he is a good president.”

“Romney because of the mounting deficit.”

“I am for Obama because of his determination and ability to solve problems. He’s very much in real time and still the best person for the job.”

“I think that both candidates will only continue to facilitate the current dualistic, unresponsive and inefficient system of government that leaves people frustrated and feeling not heard.”

“Obama. The reasons are many but basically it is exclusionary versus inclusionary. The Democratic Party is more inclusive and the Republican Party is exclusive.”

“Obama because I think that he is the best candidate for the job. He’s got the right idea for pulling the country together and getting us through the economic crisis.”

“Barack Obama, primarily because Mitt Romney has not been specific enough as to what his plans are so he is an unknown as to what he is going to do.”

“I favor Romney because I have a lot of disagreement with the health care reform law.”

“I would be Obama all the way. I think we are our brother’s keeper and to vote the other way would be voting against that.”

“Obama because he has his heart and his head in the right spot.”

“I have voted Republican my whole life. It’s too bad the Republicans couldn’t come up with a better candidate.”

“I don’t really care for either one. I don’t like a person who comes from nowhere and has never held an accountable job and whose upbringing is suspect. Anyone who is president of this great country should own his problems and not blame others. When I think of Obama, I think of the old version of the “Manchurian Candidate.” Romney is all about himself. I doubt he can connect to the common person, however, he is a business man. He is a very successful business man and the business of this country isn’t working.”

“That 47 percent are retired, veterans, etc. so you Republicans can take a hike. All Romney cares about is the rich, he don’t care about the homeless or middle income.”

“One more year of Obama and this land will be owned by someone else. Is that what we want? Hell no.”

“Obama. The word is arithmetic.”

“Gary Johnson for president, Independent Party candidate. He is a Libertarian with whom I see pretty eye to eye on most topics.”

“Not Romney! Romney cannot be trusted because he is a flip-flopper and he stands for nothing that will help our country. He is too indecisive, and a president has to be quick-witted and wise to make the tough decisions that face our country.”

“Romney, because I agree with the Republican platform and believe that Romney has the business sense to make much better decisions regarding our economy. We desperately need that kind of leadership. I feel that Obama has been idolized by our liberal media and is paying too much attention to campaigning than running our country.”

“Romney may as well quit now that he’s publicly called military personnel and retirees a drain on society, because they don’t pay income taxes.”

“Obama: The evil I know is better than the one I don’t.”

“I am a first-year voter, and I’m voting for Obama! He is for the greater good of us poor folk. I’m in college on a tight income, and I cannot afford to have Romney be our president. I feel safer with someone who can connect with me rather than someone who is too rich to even bother with the people who are considered ‘poor.’”

“I’ll go with Romney! I don’t vote for folks who uphold abortion, same-sex marriages, high taxes, spending until we’re bankrupt, little by little chipping away at what our forefathers fought so hard for. He doesn’t recognize our constitution, won’t listen to the people, and my list could go on and on! I will attest that both sides have a lot of issues but not voting is essentially placing a vote. May God bless America despite how we have been spitting in his face!”

“I am voting strictly a Republican slate because of the ineptitude of the current administration.”

“Romney’s out of touch, and I think Romney and Ryan have not brought forth specifics on how they will handle things economically.”

“Obama. I am an educator, and he has plans that are a lot more pro-education.”

“It’s a tough one this year, and I am conservative. I am undecided.”

“In years past I voted Democratic, and I probably will this year because I feel the guy that is in there is better than the guy he is running against.”

“I favor Romney because I think Obama has had four years, and what has he done? He has done nothing: $16 trillion in debt, 47 percent are on some type of government help, $4 gas, 8 percent unemployment.”

“I will vote for Obama. He’s going to save my Social Security and Medicare.”

“I am for Romney, just like most of my friends are.”

“Barack Obama. I am not Republican.”

“I hate to admit it, but it is the first time I’m not voting, because I don’t like either one.”

“Obama has had a jobs bill before Congress since the start of his term. They’ve never brought it up for a vote, though they’ve had time to take votes to repeal the Affordable Care Act 33 times since then.”