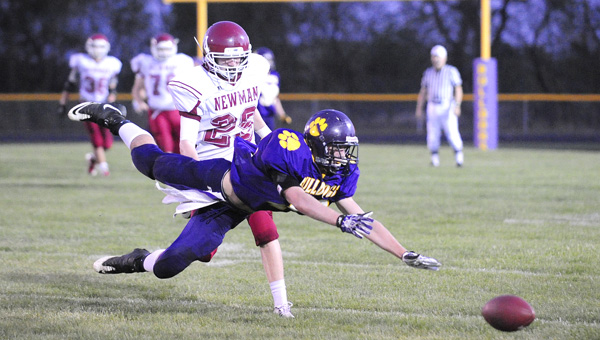 LAKE MILLS — If it weren’t for the final seven minutes in the second quarter, Lake Mills may have came out on top Friday against Newman Catholic instead of a 34-14 loss.

The Bulldogs’ Nathan Banwart made a 4-yard run for the lone touchdown in the first quarter with 3 minutes, 53 seconds remaining.

In the second quarter, the Knights kept the Bulldogs on defense down to the final 16 seconds.

At 3:11 Bulldogs’ Hunter Kingland made a completed pass to Taylor Nelson. Holding was called on Lake Mills and after a 10-yard penalty, play resumed at the 15-yard line.

Just seconds later, a pass by a Lake Mills’ player was intercepted by Newman Catholic’s Carter Neidermayer who made a 29-yard return for a touchdown. Once again, Woods kicked the extra point.

The Knights weren’t done. They closed out the half with a touchdown by Mariner with 16.3 seconds on the clock. Woods’ kick was good.

“Newman Catholic was a state finalist last year,” Bulldogs head coach Bill Byrnes said. “You can’t make too many mistakes against them. And, obviously we were doing everything we could, but we just didn’t execute on special teams.”

After scoring three touchdowns for the Knights, Mariner was taken out of the game with seven minutes remaining in the third quarter with an injury.

The Bulldogs played better defense in the second half, allowing just one more touchdown with 4:32 left in the third quarter.

“We did a better job of tackling,” Byrnes said. “It was a physical game and we kept battling.”

The fourth quarter was even better for the Bulldogs as they kept Newman Catholic from scoring and picked up a touchdown of their own with two minutes left in the game. Banwart made his, and the Bulldogs’, second touchdown of the game with a 10-yard run. Byron McDougall’s kick was good.

Even though Lake Mills lost by 20 points, Byrnes tried to keep his team positive.

“There’s a lot of football left.” Byrnes said. “We’ve just got to recover from it and move on to the next game.”