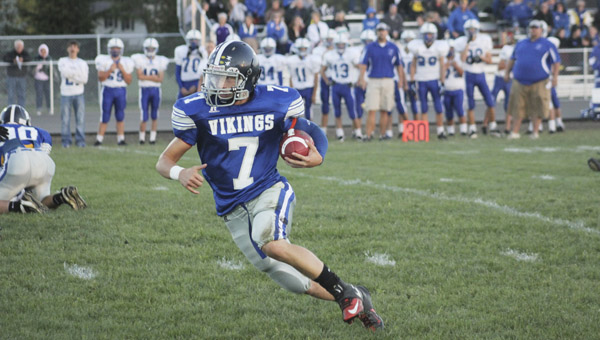 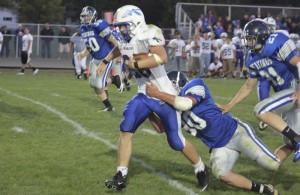 In Iowa, schools that don’t play 11-man football play eight-man football, and they play on 80-yard fields. Fans have to grow accustomed to seeing the 40-yard line at midfield.

Northwood-Kensett coach Dave Capitani said the team was able to take advantage of turnovers and had strong performances from special teams. He said a couple of players were dinged up, but they did enough to win. 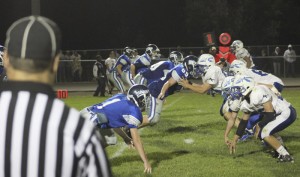 Players launch themselves at each other on a first down in the fourth quarter Friday of a football game between Northwood-Kensett and Rockford. -- Tim Engstrom/Albert Lea Tribune

“As a whole, the team played well,” he said.

The Warriors put the first points on the board Friday with Brandon Emerson tossing a 60-yard pass to Logan Johnson. With a successful conversion, the score was 8-0.

The Vikings got on the board when Cameron Batton passed a 20-yard touchdown throw to Brady Cotter with 4:08 left in the first quarter. A fumble on the conversion made it 8-6.

Rockford responded with a six-yard scamper by Jacob Green for a touchdown, but the Vikings struck back with two long runs to set up a first down and goal. Brandon Brockman carried the ball two yards with 31 seconds left in the first quarter for the touchdown. Logan Butler converted the two points, making the score 14-14. 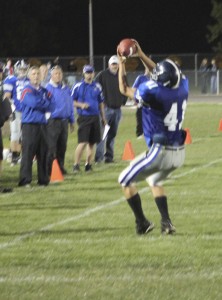 The Vikings were about to sack the Rockford quarterback in a pass play in the second quarter, but the quarterback fumbled the football. Viking lineman Gabe Kramer recovered it in the end zone for a touchdown. Butler converted, bringing the score to 22-14.

The Northwood-Kensett defense made a key stop with 6:32 left in the half, halting a Rockford drive at the 3-yard line. However, Butler fumbled and the Warriors recovered at the 8-yard line. Green reached the end zone on a 3-yard touchdown run, tying the game at 22 with 4:31 left.

With 1:21 left, Brockman intercepted at midfield and ran the ball to the 23-yard line. Before the half ended, he scored on a 1-yard run, making the halftime lead 28-23.

Tackling improved on both sides in the third quarter. Both sides held each other well. At the same time, Northwood-Kensett was troubled by penalties, while Rockford struggled with bad snaps.

The Warriors pitched to no one on a bungled option play, and Vikings linebacker Coleby Bratrud recovered the ball with 3:33 left on the clock. Batton ran it from the 22-yard-line to the 3 to set up a short run by Brockman for a touchdown. Butler added 2 points, making the score 42-28.

The game seemed about over at that point, but the Warriors continued to have trouble with long snaps. This one shot past the quarterback and to the end zone. A Warrior landed on the ball, but that meant the Vikings defense topped off their night with a safety at the 1:47 mark. The final score was 44-28.

Batton topped all rushers with 159 yards. Brockman had four touchdowns. N-K suffered 70 yards in penalties but gained from Rockford’s four turnover, three by fumbles and one by interception.

The Northwood-Kensett Vikings improve to 3-1. They would be 2-2, except their first opponent of the season, West Bend-Mallard, had to forfeit the victory because it fielded an ineligible player.

The Vikings play Janesville in Northwood next Friday.