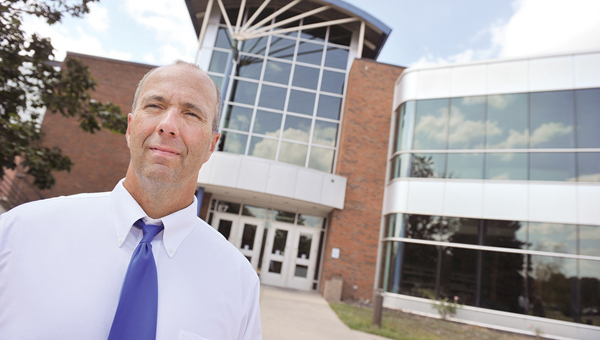 Kent Hanson is adjusting well to life in southern Minnesota. He says he’s just a regular guy, who loves riding motorcycles and playing tennis. He also happens to be the president of Riverland Community College this year.

Don’t let that stop you from calling him Kent, however. 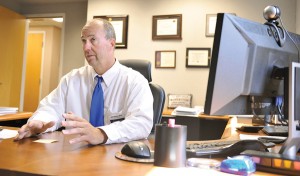 Riverland interim president Kent Hanson talks about his background in the office of the president at Riverland Community College Tuesday afternoon.

“I think that’s important, especially for Riverland at this point,” Hanson said. “I try and ground everything.”

Hanson knows the kind of students Riverland serves, since he once earned a two-year degree to work as an X-ray technician.

“I really started out like most of our students that don’t exactly know where they want to go,” he said.

After working for almost five years and pursuing a bachelor’s degree in psychology from the University of North Dakota — where he would eventually earn his Ph.D in educational leadership — Hanson found a teaching position, which he said was a good natural progression for him. Fast forward through a career where he served as a radiology program director and a dean at Northwest Technical College, followed by his post as provost and vice president for academic and student affairs at Northland Community and Technical College (formerly Northwest), and Hanson finds himself with an opportunity to expand his skills.

It was on the last day of an executive leadership training program sponsored by MnSCU and the University of Minnesota system that Hanson heard about the interim president position here. Hanson thought the job a good opportunity to apply his skills somewhere new for a year and take new things back to Northland from a similar organization.

“The institutions are similar in size, multi-campus and rural,” he said. “Everything matched up really well.”

While he’s here, Hanson wants to make sure things are low-key as Riverland staff switches from one president to another. He knows what it’s like to get a change in leadership, having served under three presidents at Northland since he became a vice president in 2003, so he’s making a concerted effort to get confidence and momentum going for a smooth transition to the next president. As interim president, Hanson is unable to apply for Riverland’s presidency, but he’s excited to lead Riverland for the year and serve as a resource for potential presidential candidates.

That’s not to say Hanson isn’t overseeing a few initiatives while he’s here. Aside from the grants, programs and other duties a college president has, Hanson is looking to strengthen Riverland’s vision to retain students, as well as strengthening Riverland’s presence in Owatonna.

The Owatonna College and Community Center is run by Riverland staff, but the school still doesn’t carry the Riverland name on the front of the building. People who pass the school on Interstate 35 might not realize its association with Riverland.

“We see it as Riverland’s third campus, so I’d like to solidify the branding of that campus over the course of this year,” Hanson said.

In addition, Hanson hopes to further Riverland’s efforts to retain and attract students through several ways. Riverland will bring in consultants to help shape a strategic enrollment management plan, and get an institutional development committee to study similar rural postsecondary institutions and set retention and graduation goals.

“Many rural colleges face challenges with declining populations, and I want us to set a strong foundation for how we go about recruiting students, how we get them enrolled, how we retain them,” Hanson said.

Hanson is embracing the challenge, and is impressed by the level of community involvement with Riverland. He’s already participating in community programs, including a leadership program in Albert Lea. But he’s still finding time to be the low-key, normal kind of leader for Riverland. After all, he says the roads here are great for motorcycle riding.