Reward is offered in vandal case 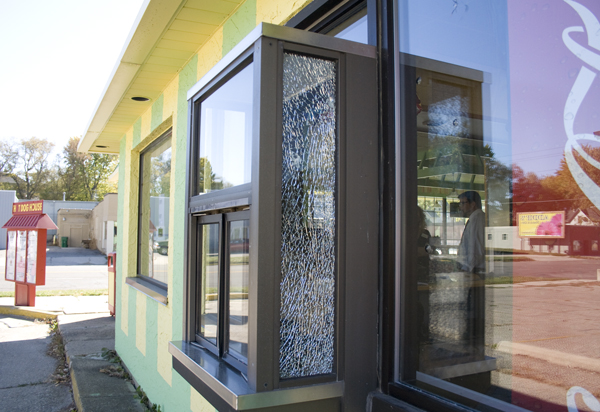 Seven windows were damaged at The Hotdog House earlier this week in a string of vandalism in southern Albert Lea. -- Sarah Stultz/ Albert Lea Tribune

A local business owner is offering a $500 reward to help solve a case of vandalism of several vehicles and buildings in southern Albert Lea.

Don Wheat, owner of The Hotdog House, 910 S. Broadway, announced the reward Wednesday after the restaurant was one of more than a half dozen damaged.

Wheat said someone reportedly shot at seven windows on his property with what police are describing as an airsoft gun. At least one of the windows shattered; the others have marks from the pellets.

He estimated the cost to repair the windows is more than $2,600.

This is particularly so, he said, because the restaurant is less than a week away from opening its doors to customers after several months of renovations. Wheat purchased the property, a former Kentucky Fried Chicken, in November.

He said his manager noticed the windows when she came into work Monday. Staff members have been busy training and making last-minute preparations for the opening.

Albert Lea Police Lt. Darren Hansen said though police think they know the people responsible for the damage, the people are not cooperating with authorities.

He said he thinks the vandals are teenagers.

“If the public sees a group of kids out that look suspicious, don’t be afraid to give us a call and have them checked out,” Hansen said.