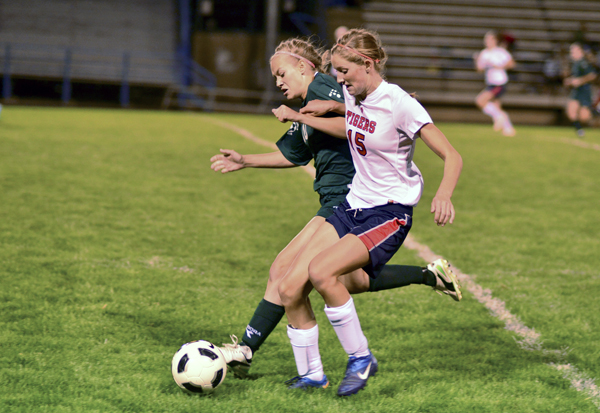 The Albert Lea girls’ soccer players started off by celebrating parents’ night before their match against Rochester Mayo Thursday in Albert Lea. The Tigers got off to a slow and sluggish start by allowing two quick goals by the Spartans in the first five minutes of the game.

Tigers head coach Rick Barnhill said the speed and athleticism of the Spartans caught the Tigers off guard in their 3-0 loss.

“They just came out with high emotion, and we have been starting slow all season,” Barnhill said.

Another Spartan goal was scored at the 14:02 mark of the first half to put the score at 3-0 going into the half.

“We went into a more aggressive formation in the second half,” said Barnhill on the half time strategy. “We committed more players to the front and took more risk in the back.”

The risk paid off as neither team was able to put the ball past the goaltender in the second half of the game.

“That eight minutes is a telling sign,” Barnhill said. “They just made the most of their shot opportunities.”

Barnhill said Megan Kortan really stood out in the game: “She was really fighting, did a lot of ball winning, and distribution to the front line.”

The Tigers will host an invitational Saturday beginning at 9 a.m.