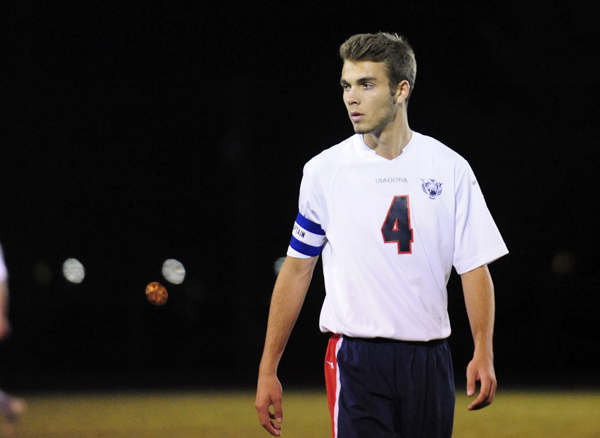 Albert Lea’s Tyler Shaw watches play on the soccer field Tuesday at home. Shaw set the Albert Lea High School record of goals scored in a season at 17 after scoring four goals during the game against Faribault.

Tyler Shaw, the top scorer for the Albert Lea boys’ soccer team, broke a school record on Tuesday en route to the Tigers’ 6-0 shutout of Faribault.

Shaw, who started the game with 13 goals recorded, scored three goals in the first half and one in the second to reset the record at 17 goals scored in a season.

“It’s surreal,” the senior soccer player said. “I never imagined I would be able to do it.”

As Shaw thinks about the season and his high school soccer career coming to an end in a few weeks, he said setting the record has been the best part.

Tigers head coach Joe Squires said Tuesday’s game was the second game where Shaw had more than a hat trick.

But, it wasn’t just Shaw trying to get a score on the Falcons.

“Everyone was looking for goals tonight,” Squires said. “You could tell that. We were taking lots of shots from outside angles and going for it the whole time.”

The Tigers’ goalkeepers Nate Hogstad and Foster Otten both made saves for the team. Hogstad made three and Otten made two.

The Tigers’ other two goals came from Tyler Vandenheuvel and Preston Smith. Shaw had one assist and Tim Furland had two.

“Tim has been instrumental in helping Shaw,” Squires said. “He draws a lot of defenders and sets up Tyler a lot.”

Squires’ continued emphasis on slowing down the play proved to be a good idea as the game clock ticked closer to zero.

He said when the team plays slow and in control, they become a team that no other team can touch. But, when the players get frantic like they were toward the end of the game, the other team becomes dangerous.

In an effort to sink more goals into the Falcons’ net, the Tigers were making quick shots that flew over or past the net.

“The defense has been up and down at points, but they’re communicating,” Squires said. “They stepped it up tonight.”

The Tigers are scheduled to play next at Rochester Century at 7 p.m. Thursday.