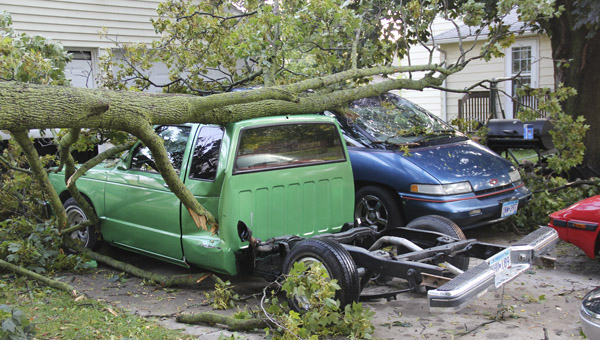 A branch of a maple tree rests this morning on the top of a pickup cab and a Chevy minivan at 635 Sixth St. In the same driveway was a sports car, safe and sound. -- Tim Engstrom/Albert Lea Tribune

A severe thunderstorm pounded the Albert Lea area around midnight this morning, knocking out the 911 dispatch service for about two hours.

All 911 calls were rerouted to Mower County. 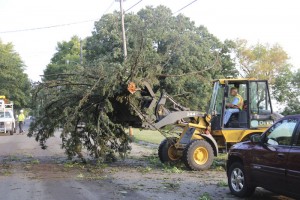 Officials at the Freeborn County Law Enforcement Dispatch reported at about 12:30 a.m. that they lost their computer and radio system due to the storm. They reported at 2:30 a.m. that service had been restored.

According to the National Weather Service, the storm struck at just about midnight. The automated weather system at the Albert Lea Municipal Airport at 12:14 a.m. recorded sustained winds of about 25 mph and gusts up to 48 mph. 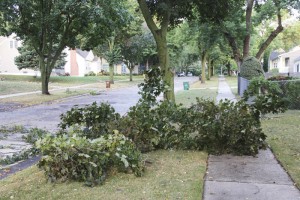 Maple branches are on the ground on Sheridan Street after an overnight storm hit the area. The neighborhood had several maple branches down. -- Tim Engstrom/Albert Lea Tribune

Albert Lea received six-tenths of an inch of rain, according to KIMT meteorologist Tyler Roney.

“The big thing about it was it was a big bow echo, a big surge,” he said. “Strong winds were the biggest threat.” 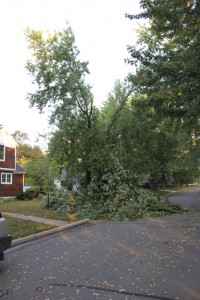 A tree is downed by Lee Place and Garden Road this morning after an overnight storm. -- Scott Schmeltzer/Albert Lea Tribune

He said Mason City recorded a gust of 70 mph and Rochester posted one of 74 mph.

A branch of a maple tree fell on two automobiles at 635 Sixth St. in Albert Lea, the home of Eduardo and Dora Rodriguez.

A live power line was down this morning during the drive to work on Minnie Maddern Street, a cul de sac across from the Freeborn County Fairgrounds. Albert Lea police advised people to not move cones placed to keep people and cars away from the power line. 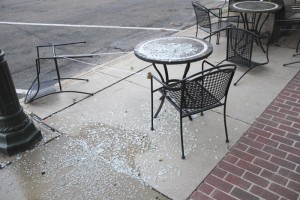